China Assumes her Position in the Modern World 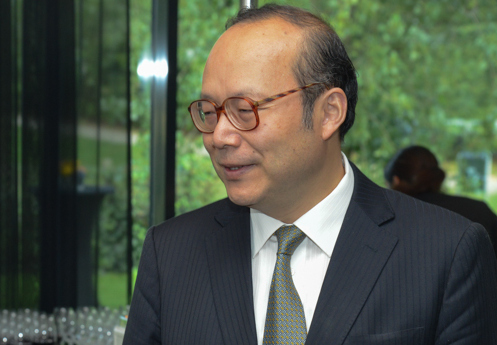 Towering high above the lush green woods of Scheveningen (Schevningsebosjes), in an impressive edifice, is the Embassy of the People’s Republic of China.

Within the chancellery I met with H.E. Ambassador Chen Xu, one of the last group of diplomats to present credentials to H.M. Queen Beatrix. Chen describes the ceremony as a “once in a lifetime” experience.

The Ambassador envisages benefiting fully from the international institutions located in The Hague, there are already Chinese judges at the ICJ and the ICTY, and China is a member of the OPCW.

Chen believes that global questions require joint efforts which makes friendships and cooperation essential since they help create a peaceful atmosphere within which consensus on matters of mutual concern can be reached. One example cited by the Ambassador of reaching a consensus was the agreement reached by China and the EU on the solar panel question where ultimately both parties were satisfied with the end result. Win-win is one aphorism that Chen frequently uses.

China enjoys economic growth, but what role will the country play in global affairs, what foreign policy will it follow in the future and what impact will this have on the world?

As Ambassador Chen elaborated, despite great changes to the international landscape, independence and peace have been the two defining features of China’s diplomacy and the cornerstones of its foreign policy for more than sixty years. China is willing to become more involved in global affairs through collaborating with others in order to make an always more useful contribution.

In this context the recent successful visits by H.E. President Xi Jinping to various parts of the world including Russia, the African continent, to Trinidad and Tobago and Costa Rica were, according to Chen, of great importance. A new positive chapter in the bilateral relationship between China and the United States was agreed upon including certain core elements such as mutual respect and win-win cooperation.

After 41 years of diplomatic ties, China is reinforcing its relationship with the Netherlands, its second largest trading partner within the EU with a turnover of 68 billion USD. There are other key connections between the two countries such as in education, where over 8000 Chinese students study at Dutch universities, as well as the Netherlands expertise in water resource management, where the substantial Chinese agricultural sector could benefit from Dutch experience.

China’s leadership has rallied the Chinese people for the realisation of the two centenary goals and the Chinese dream of national renewal. Ambitious plans are being outlined for 2020 and 2050, by which date China hopes to achieve a state of wellbeing for all citizens.

The road to attaining this goal has already been set out. It may be more of a bumpy road than a smooth ride, but China has embarked on the right path of socialism with Chinese characteristics. Ambassador Chen believes that with strong leadership and hardworking citizens, China will continue to move forward.

Ambassador Chen wishes the people of the Netherlands happiness.

Remember: the Embassy is at your disposal.