The IPDC is a non-for-profit group with the mandate to support and enhance the practice of public diplomacy at the national and international level focused on all the men and women who constitute the great diplomatic corps, coming from every corner of the world to restlessly serve their country.

IPDC’s first international awards were presented in 2014 in The Hague. Since January 2018 we were invited to organize the first Ambassador’s Awards with the Faculty of Civil Law of the University of Ottawa in collaboration with the Deanship of the Diplomatic Corps of Canada.

Some additional goals of the IPDC in cities where the awards take place are: Supporting local government authorities in their international relations policies, promote close ties between diplomatic missions and the civil society, contribute to the development of foreign direct investment, facilitate foreign business partnerships and last but not least, to help metropolis to retain, attract or expand international organizations. IPDC special contributors are experts in public diplomacy, deans of the diplomatic corps, diplomats and local engaged staffs from diplomatic missions, officers from ministries of foreign affairs, academic centres and international relations specialists.

The IPDC is headquartered in The Hague, the Netherlands, as part of Diplomat Magazine with an Ottawa-based group since January 2018 working in close cooperation with Diplomat Magazine Netherlands (www.diplomatmagazine.eu), the Faculty of Law of the University of Ottawa, the Deanship of the diplomatic Corps of Canada and other key institutions.

Once a year the Deanship of the Diplomatic Corps of Canada, the faculty of Civil Law of the University of Ottawa and  the International Public Diplomacy Council  welcome heads of diplomatic missions accredited to Canada, dignitaries, members of the media and special guests to Canada’s Ambassadors of the Year and Public Diplomacy Awards ceremony where twelve winner ambassadors or high commissioners from twelve geographic regions will be recipients of these special recognitions in terms of public diplomacy outreach. These awards are the first of their kind in Canada’s history. They are addressed with the aim of enhancing interactions between Canadian civil society and foreign diplomatic missions, as well as to recognize Ambassadors and High commissioners’ efforts on Public Diplomacy and diplomatic innovation. Special recognitions will be given to diplomats or members of the civil society, for their commitment and key role in supporting the diplomatic corps and this faculty of law.

For further information on the International Public Diplomacy Council, please contact us at: 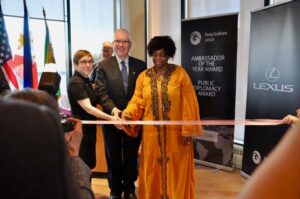 Ambassadors of the Year & Public Diplomacy Awards by Diplomat Magazine