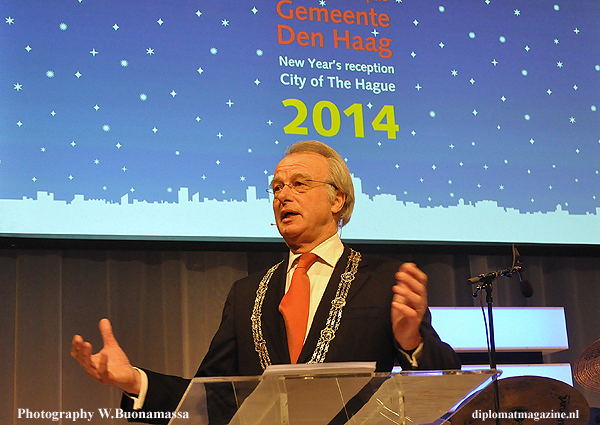 The annual New Year’s reception of The Hague:

As every year the Municipal government of The Hague invited officials and an hour later all volunteers of the city to the annual New Year’s reception, scheduled on Thursday 2 January 2014. The evening began at 18.30 in the Atrium of the City Hall. It was nice to meet our diplomatic friends, His Excellency of France Monsieur Ménat, back from France, Her Excellency the ambassador of the Republic of Croatia, back from Rome, Her Excellency the ambassador of the Republic of Indonesia who stayed in the country and many other dear friends and officials. Happy New Years wishes were exchanged.

The Mayor Jozias van Aartsen delivered a speech first to warn about private use of fireworks and that this use has to be changed in the coming years. He thanked all the volunteers who try to make The Hague a better place every day. Then he mentioned some upcoming international events in the year to come for this beautiful city. At the end of his speech he turned back to the past, November 30 and the reminder of the landing of Prins Willem I at Scheveningen two hundred years ago. Director Aus Greidanus received the Hague Plume 2013.

The plume and the corresponding sum of 2,500 euros was handed to him by Mayor Jozias van Aartsen. Greidanus received the award for the “unique way” in which he has put The Hague and Scheveningen on the map.