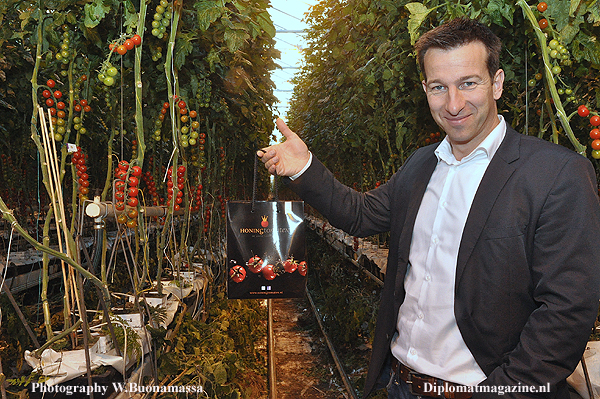 By Buonamassa W.G., Photography and reporter.

Agricultural development  based on bringing knowledge.

Loije Tomato is an old company founded in 1946 by J.M. Looije,  father of the actual owner Jos Looije.

The principal main idea , was to cultivate vegetables. In that time where no green houses, therefore the production was only based on the weather climate. In 1970 the son Jos Looije, decided to take over the company and cultivate tomatoes in his best possible way. He started to build a green house and cultivate different kind of tomatoes. In the edges of the normal season he used heating system in the green house so ;  he could supply tomatoes to the market  with big profit in those periods.

Jos Looije experimented cultivation of different kind of tomatoes such as the well known little cherry tomatoes which gives more manual work. In the year 1998 they started a company in Spain with idea to produce from December to march  tomatoes using the climate there.

With the introduction of special lights and heating system in the green houses in Holland , was not need for Spain anymore. Their main export market are West Europe and the Scandinavian countries but Japan and the Middle East are becoming  new export market.

They are aware of the food problem in the world and  started a project in Kenya in collaboration with several farmers. They give them only support  and advice  how to grow vegetables. Twice every year their team goes there for several weeks  visiting their cultivation and give advice on how to sell their products and develop quality norms such as in Holland. They have also visited China to discus collaboration possibilities.

Their best product at the moment is the Honey tomatoes to find only in special shops. But is only 20 percent of their  production  selected as Honey tomatoes. Specialist are working in their company to harvest and promote this unique product. Even is chosen and used for ice cream and filling in chocolate bonbons .

The only 35 percent of honey tomatoes is sold in Netherlands and the rest is selected for export.

The price is higher because of quality, low production quantity, intense control, limited shops that may sell it.