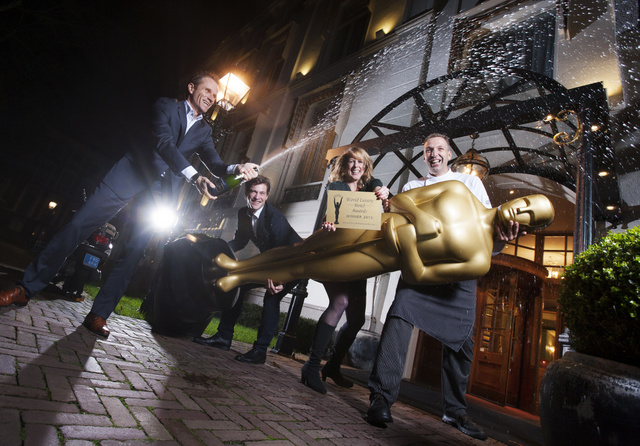 THE HAGUE, 7 NOVEMBER 2013. The Carlton Ambassador Hotel has been presented with the prestigious World Luxury Hotel Award. This four-star boutique hotel in The Hague has been selected as Europe’s best ‘Luxury City Hotel’. This award reflects international hotel guests’ appreciation of the Carlton Ambassador’s renovation and introduction of the Signature Rooms, in which the hotel recently invested to enhance its luxury boutique elegance.

The World Luxury Hotel Award is accepted as the world’s most prestigious and exclusive award in the luxury hotel sector. More than a thousand hotels, lodges and resorts from 87 countries were nominated in fifty categories in 2013. Award winners were announced during the annual World Luxury Hotel Awards gala in Phuket, Thailand. The Carlton Ambassador Hotel in The Hague was proclaimed best ‘Luxury City Hotel’ in Europe.

Marinique de Wet, Director at World Luxury Hotel Award, editor’s choice notes state: “A lane bordered by old chestnut trees, a fitting environment for this quiet, elegant boutique hotel with its tasteful interior and superb service that is The Carlton Ambassador Hotel, situated in the city centre of The Hague. Experiencing this exquisite hotel as a haven of relaxation is only one of the many things guests had to say. There are also the people who like adventures and discovering the city of The Hague with its elegant town houses, renowned museums and variety of beautiful stories, theatres and art galleries. Going home to this hotel is pure bliss, this is made more special because of their culinary excellence.”

“We are incredibly proud to have won this international award for our new boutique style”, said Arwin Paulides, General Manager of the Carlton Ambassador Hotel. “The granting of this World Luxury Hotel Award is an endorsement of our hotel’s unique and charming character. The new Signature Rooms certainly do seem to have the ‘wow’ factor for our guests. The room styling combines luxury elements and modern technology with attention given to the smallest details.”

Rooms with a Signature

The new Signature Rooms ensure the Carlton Ambassador is a prominent boutique hotel with international allure. The new room type is decorated in a Dutch boutique style with elements from Hindeloopen, Delft Blue accessories and ‘Hague Blue’ upholstery. The rooms are equipped with a modern one-touch panel and the first wireless music system developed specially for the hotel industry, which enables guests to enjoy their own music via a bluetooth connection. The Signature Rooms are furnished with flat screens, Nespresso coffee machines and of course, the highest quality beds and bedding.

The Carlton Ambassador is one of the pearls of the Carlton Hotel Collection and is renowned in The Hague. The hotel’s charming character and boutique style offers a unique experience, not only for diplomatic and business guests but for leisure travellers too. Carlton Ambassador guests find themselves within a stone’s throw of the Binnenhof, Paleis Noordeinde, art galleries, shops, bars and restaurants, and the beach.

About the Carlton Ambassador Hotel The Hague

The four-star Carlton Ambassador boutique hotel is located in the centre of The Hague, a stone’s throw from the Binnenhof and Noordeinde with its many art galleries, shops, bars and restaurants. This distinctive hotel with 78 charming guest rooms and suites is characterised by its uniquely elegant building, stylish ambiance and sublime and attentive service. The recent addition of twenty beautiful Signature Rooms, furnished entirely to optimise guest comfort, makes the Carlton Ambassador Hotel an excellent base for business, diplomatic and leisure guests. The Carlton Ambassador is part of the Carlton Hotel Collection, with hotels including The Dominican in Brussels and Banks Mansion in Amsterdam. These hotels have received many prestigious awards. The Carlton Hotel Collection has hotels in UK, Netherlands and Belgium.