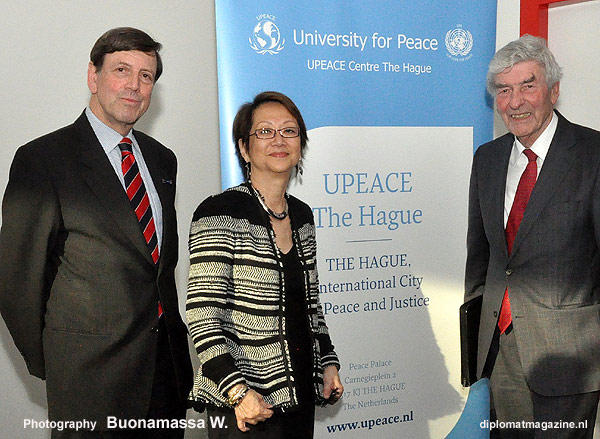 The PeacePalace’s AcademyBuilding was the venue for a lecture on Friday 7 March by Judy Cheng-Hopkins, United Nations Assistant Secretary-General for Peace building Support.

One of the key guests attending the lecture was Ruud Lubbers, the former Dutch Prime Minister and former UN High Commissioner for Refugees. Mr Lubbers is also a member of the University for Peace (UPEACE) advisory council.

When answering the question of what is Peace building, Cheng-Hopkins set out the elements required for peace building under the acronym SCHLEP (schlep means to drag from Yiddish).

Civil society mobilization and civic education, the civilian oversight of the army.

E – Empowerment of women and youth

According to Cheng-Hopkins, the role of women in peacebuilding if often not officially recognized and could be seen as the missing link in the peacebuilding process. She continued by stating that women are the ultimate victims of conflict, but also the ultimate agents of change because of their levels of responsibility for agriculture and family in developing countries. Women also play peace-building roles daily, typically at grassroots levels, for example the Acholi women groups vis-à-vis the Lord’s Resistance Army (LRA) in Northern Uganda. Cheng-Hopkins sees these women as important, every-day peace builders with importantly an innate interest for peace and a growing role in post-conflict parliaments.