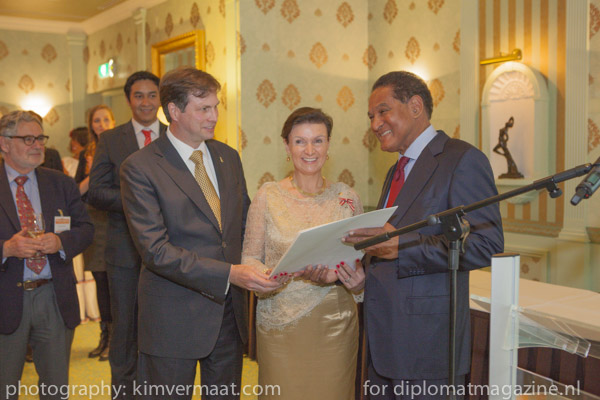 On the opinion of Dominican expats  coming from Amsterdam, Haarlem, Den Haag and other cities “it was the best attended and the highest quality event ever presented by the Dominican Embassy in the Netherlands”. Indeed, first class venue together with  200+ renowned dignitaries and guests sharing a unique diplomatic ambiance. One shall mention the warmth reception of the staff of Carlton Ambassador and butlers from The International Butlers Academy from Valkenburg followed by a line of reception headed by  H.E. Ambassador Luis Arias, members of his diplomatic staff and Dominican dancers from the Latin Dance Social Club of Haarlem and volunteers from The Hague. Dominican rum was served as a welcome drink. Top class snacks came from Amsterdam, from a new state-of-the-art catering company founded by Mrs. Guelda Almonte. Their Imperial and Royal Highnesses Archduke Sándor & Archduchess Herta Margarete handled a special Flame of Peace Award   www.flameofpeace.org to Ambassador Arias, whilst the latter publicly recognized Their Imperial and Royal Highnesses’ support to peace in the world with an official certificate. Ambassador Luis Arias was not only surprised by the support he received from more than fifteen head of diplomatic missions that were present, but to the President of the International Criminal Court and five judges from international courts based in the Hague, members of the press, top Dutch entrepreneurs, officials from the Ministry of Foreign affairs, representatives from the Dominican Community in the Netherlands and the like, all paying a cordial visit to Diplomats Meet & Greet.

Ambassador Arias was very grateful to volunteers for the Dominican Embassy in coordination with Diplomat Club The Hague, Diplomat Magazine, Carlton Ambassador Hotel and sponsors.  This is the first time that during Diplomats Meet & Greet the public was immersed in dancing, this time with Dominican Bachata and Merengue. Ambassador Arias showed us his skills in Dominican music. During his welcome speech ambassador Arias was impressed by the volunteer work and engagement of jazz musicians Mrs. Sonja Langbroek and Mr. Rinus Bakker,  Mrs. Gladys Carrasco, Dominican expat living in Utrecht,    Mrs. Nucita and Miguel de los Santos from the dancing school in Haarlem,  the Dominican dancing couple from The Hague “Esperanza and Iris” that ‘switched on” the party,  the valuable help from Mrs. Rossy Mateo and the embassy’s diplomatic staff. Last but not least, Ambassador Arias mentioned the dedicated work of  his “very active Minister Counselor Eugenio Matos”.  The latter engaged in this project since early December, 2013 together with Diplomat Club The Hague’s volunteer directors Mrs. bb and Mrs. Mayelinne De Lara, Mr. Arwin Paulides, Manager of Carlton Ambassador and volunteers from Diplomat Magazine. This is another positive result from Dominican Republic Embassy’s Public Diplomacy, in addition to Keith Dinnie’s article stating this fact in https://diplomatmagazine.eu/2014/03/02/fine-art-public-diplomacy/

Which is the link between Their Imperial and Royal Highness and the Dominican Republic?

Archduke Sándor attended the « Colegio Carol Morgan » in Santo Domingo. His father, Archduke Dominic, who is co-owner and administrator of BranCastle (known colloquially as “DraculaCastle”, www.bran-castle.com) He was lecturer at the “Instituto Tecnológico de Santo Domingo”.

During the II World War some members of the Habsburg House led by  Crown Prince Otto of Austria, Hungary, Bohemia and Croatia, assisted the Portuguese Consul-General in Bordeaux, Aristides de Sousa Mendes, to smuggle Jewish refugees and obtain visa for them to the Dominican Republic as “farmers”.  The Dominican Government was amongst the few countries welcoming Jewish refugees. His Imperial and Royal Highness Archduke Sándor was born in 1965 in Vienna, Austria, as a direct descendant of Empress and Queen Maria Theresia of the Holy Roman Empire, Archduchess of Austria, Queen of Hungary, of Bohemia, of Croatia, etc. He is a member of the Tuscan line of the Habsburg Dynasty. He spent his youth in Austria, the Dominican Republic as well as Antigua and Barbuda. After he completed his university studies in the USA, his professional activities took him back to Europe, particularly to Austria. Presently he is on the board of directors of several companies and organisations.

Maria Theresia ,Empress of the Holy Roman Empire, Archduchess of Austria, Queen of Hungary, Bohemia and Croatia and Franz I Stefan of Lorraine, Holy Roman Emperor, Grand Duke of Tuscany.

Karl Salvator, Archduke of Austria, Prince of Tuscany and Marie Immaculata Princess of the Two Sicilies

Anton Maria, Archduke of Austria, Prince of Tuscany and Ileana, Princess of Romania

Catherine II the Great, Empress of Russia and Peter III, Emperor of Russia

Pavel I Petrovich, Emperor of  Russia and Sophia Dorothea Princess of Württemberg

Nikolai I Pavlovich, Emperor of Russia and Friederike Luise Princess of Prussia

Aleksandr II Nikolaievich, Emperorof Russia and Marie Princess of Hesse and by Rhine

Alfred, Duke of Edinburgh, Prince of the United Kingdom of Great Britain and of Saxe-Coburg and Gotha and Maria Aleksandrovna, Grand Duchess of Russia

Ferdinand, King of Romania and Marie of Edinburgh, Princess of the United Kingdom of Great Britain

Anton Maria, Archduke of Austria, Prince of Tuscany and Ileana, Princess of Romania

Victoria, Queen of the United Kingdom of Great Britain and Albert Prince of Saxe-Coburg and Gotha

Ferdinand, King of Romania and Marie, Princess of Edinburgh

Anton Maria, Archduke of Austria, Prince of Tuscany and Ileana Princess of Romania