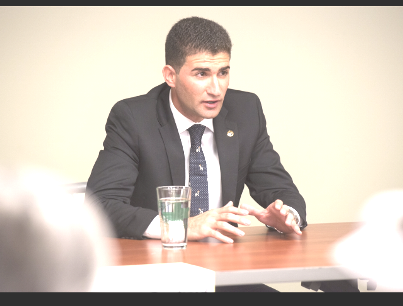 The five republics of Central Asia (Tajikistan, Uzbekistan, Turkmenistan, Kyrgyzstan, and Kazakhstan) are endowed with an immense amount of natural resources and are located in the center of Eurasia. The collapse of the Soviet Union made it possible for these Central Asian states to develop independent relations with the rest of the world.

However, the emerging economic and geopolitical significance of these five republics to China is currently defining the international relations of these republics.

Kazakhstan in particular has attracted the interest of the Chinese government. Geographically, Kazakhstan shares a border with China’s western province, Xinjiang. Politically, Kazakhstan is still a dictatorship. China, unlike the United States and European powers, registers no objections to the Kazakh government’s “human rights abuses”. This makes China’s political and economic transactions with the Kazakh government much easier.

As China’s thirst for oil and natural gas has stimulated the Chinese to invest heavily in the markets of Central Asia, Kazakhstan will continue to be a particular target for that investment. Janet Liao describes Chinese economic interest in Kazakhstan:

With the steady growth of the Chinese economy and its energy demands, Kazakhstan together with other central Asian states— has become one of the key sources for China’s energy supply. In terms of absolute amounts, oil from Kazakhstan still only accounts for a small portion of China’s total oil imports: in 2004, China imported 1.19 million tons (8.3 million barrels) of crude oil from Kazakhstan, compared with the country’s total imports of 91million tons (636.8 million barrels), about 1.31 percent. Nevertheless, a bilateral strategic partnership underpinned by energy cooperation is believed to fit the fundamental interest of both nations.

Of course, China is not the only country eyeing the natural resources of Central Asia. Western Europe, Russia, India, and the United States are interested as well. Thus it is no surprise that Central Asia in recent years has become the center of world attention.

It is not only energy demands that draw China to Kazakhstan, but also security concerns. The western province of China—Xinjiang or the “NewTerritories”—was annexed to the Chinese empire in 1884. However, ever since its addition to the empire, the [Muslim] Uyghurs, the natives of the province, have been trying to separate and create their own independent state. During the upheaval and instability in China in the 1930s and 1940s, the Uyghurs broke away and created an independent Xinjiang. However, as the People’s Republic of China (PRC) emerged, Mao crushed the natives and re-annexed Xinjiang. Many of the Uyghurs in Xinjiang left China and settled throughout the region now governed by the five Central Asian republics. Uyghurs remaining in China have fomented unrest and been found responsible for “several bombings” in Xinjiang and other parts of China, writes Susan Shirk who is an expert on Chinese politics. China has been working with the Central Asian states to avoid political problems and to extinguish the remnant Uyghurs’ aspirations for an independent Xinjiang by preventing the Uyghurs’ partnering with the diaspora scattered throughout the region. The Uyghur dynamics are just one source of the multifactorial ethnic unrest that will continue to be a major domestic issue for China. Non-Uyghur separatist groups in Tibet and Mongolia also pose strategic threats to the regime. Thus, social unrest, in addition to economic concerns, contributes to need for China to march westward.

Central Asia is at the center of a super-continent whose strategic importance is many fold: it is a continent that is home to three of the world’s most sophisticated and advanced economic regions. Seventy-five percent of the world’s population lives in Eurasia and, as Zbigniew Brzezinski notes, “three-fourths of the world’s energy resources” are there as well. Eurasia is also the world’s most dynamic continent, as it is the location of six of the largest economies as well as the six biggest military spenders. The location of Central Asia has made it a “strategic pivot.” The interconnectedness and high degree of economic interaction among great powers makes it unlikely that a strategic player (China or Russia) could use Central Asia as a staging ground for an invasion. However, it should be “America’s primary interest to help ensure that no single power come to control this geopolitical space” [Zbigniew Brzezinski] because any strategic player dominating Eurasia would likely seek to control other parts of the world.

Central Asian countries, especially Kazakhstan, can be a conduit of stability, as their natural resources can satisfy some of the energy demands of the People’s Republic of China. Central Asian countries are rich in oil, natural gas, and other resources, and therefore, it makes sense for the Chinese to extend their economic muscle to that part of the world. Kazakhstan is a country that is rich in natural resources and can help Beijing with the prospect of creating jobs for its citizens. China has been working on many infrastructure projects in Kazakhstan: roads, railroads, bridges, airports, and pipelines. These efforts further demonstrate the importance of Central Asia to the Chinese government.