We were inside the NSS 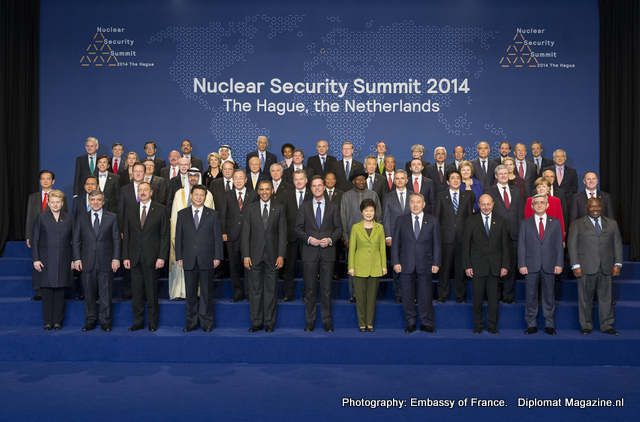 Inauguration of the NSS2014 in The Hague, the city of peace and justice.

We live in momentous times. As Editor of Diplomat Magazine I was invited to attend and cover the NSS 2014, It  was privilege to see  President Obama very closely. Under a clear blue spring sky on Monday 24 March 2014, The Hague welcomed distinguished guests from 53 countries to the Nuclear Security Summit (NSS) 2014. The Peace Palace would have been an appropriate venue for such a summit, however, logistically this one-hundred-year-old edifice is no longer adequate for a gathering of this size and the World Forum has today proven to be an excellent location.

The significance of the 2014 summit lies in the fact that its objective, preventing nuclear material from falling into the hands of irresponsible individuals, has resonance with current world tensions, for example the situations in Ukraine and Syria. Will man ever be able to eradicate war, terrorism and famine from this earth? We know this may be an impossibility, but sitting back idly is clearly not an option for the politicians of today.

The key attendee of the summit is Barack Obama, President of the US, as the NSS was Obama’s brain child. Some fifty other heads of state and government joined the president at this extraordinary event.

I overheard a conversation in which those involved were speculating whether this will be the last NSS as in around two years President Obama will be busy packing, his second and final tenure having come to an end. Would it be wise to hold a summit with a departing US president?

The atmosphere inside the summit could be described as serene. There was of course strict security at the World Forum, yet this did not feel overpowering.  Also no significant protest has been recorded to date. Several protesters were arrested in The Hague today and last Friday members of the group Stop de NSS expressed their dissatisfaction with the summit near the city’s central library.

The G7 met today at the official residence of Prime Minister Rutte, the Catshuis. High on the agenda was the matter of sanctions against Russia for violating the sovereignty of Ukraine. The question of whether Russia should remain in the G8 is expected to be discussed by the delegates.

In his opening address Prime Minister Mark Rutte set out the key objectives of the summit stating that: ‘All our discussions today and tomorrow will focus on one question: how to prevent nuclear terrorism. Or to be more precise, how can we make sure that nuclear materials won’t end up in the hands of terrorists and that nuclear material is used more efficiently and stored more securely’.

‘President Obama, you are personally responsible for getting this issue on the international agenda. The first Nuclear Security Summit in 2010, and the Washington Work Plan that it produced, still guide our efforts today. You laid the foundations, and so the world is in your debt.

‘President Park, two years ago your country hosted the second NSS, where we noted the progress we had made and raised our ambitions. And with success, because looking back on the past two years, we can see that real progress has been made. Not only have diplomatic efforts moved forward and documents been adopted, but there have also been quantifiable results. For example, since the process began the number of countries with more than a kilogram of usable highly enriched uranium has fallen substantially. This shows that we set off in the right direction four years ago in Washington, and that the summit in Seoul was also productive.

‘But we cannot rest on our laurels. We have to raise our ambitions again. We have to aim even higher here in The Hague. Because even as we speak, there are still almost 2,000 tonnes of weapons-usable nuclear material in circulation worldwide. And its security has to be our constant concern’.

Prime Minister Rutte concluded his address by observing that the leaders’ presence in The Hague today: ‘underscores once more your countries’ political commitment to this goal. This should give us confidence that we will succeed. The task we took on in 2010 demands resolve, and perhaps more patience than we would like. But in the words of Nelson Mandela, whose statue stands outside close by: ‘It always seems impossible until it’s done.’ Let us press on in that conviction – today, tomorrow and in the days that follow – towards our goal of a safer world’.