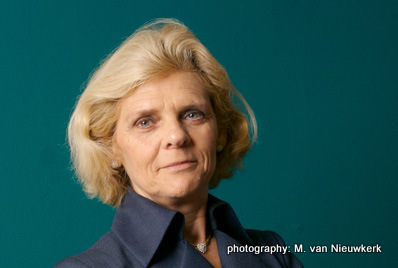 By Bonnie Klap, Editor in Chief

It is no mean feat to capture the multi-faceted career of Reinildis van Ditzhuyzen in a few sentences. Apart from being a well-known personality  on Dutch, German and French television, she is a historian, journalist and author of close to two dozen books on topics varying from history and culture, to etiquette and Royalty.

It is because of her vast expertise on the latter, that I sit down with her this month, as on April 26th  The Netherlands will celebrate its first Kings Day with a new King.

Q: Obviously it is a big moment when somebody gets to meet the King. What is the correct etiquette?

A: “First of all: You can never introduce your self. If the King happens to be present at some event  or reception, you can not just walk up to him and say ‘hello.’ The King must always take the initiative. People are usually introduced to the King through courtiers.  Generally speaking the rule is: never go to a higher ranking person. When meeting the King there is no need to bow. Queen Juliana, King Willem-Alexander’s Grandmother, abolished this rule, but for instance when meeting the Queen of Britain, Spain or Denmark, people should bow.”

Q: The Dutch Monarchy has the reputation of being a rather laid-back and relaxed Monarchy, as opposed to for instance the British Monarchy. Is this true?

A: “Yes, it is true. I have been travelling with the former Queen Beatrix and last June I also went to Germany with the new King. He is more relaxed than his Mother, but of course it is necessary to keep that distance, that dignity.”

Q: Why did you accompany  HM the King to Germany last June?

A: “ Well, I write books about the House of Orange and also about etiquette. For me these trips are very important as I see up close how the Monarchy functions.  I don’t go along on all State visits, but the trips are very interesting, also regarding how the Protocol works. I will give an example: The rule is, that there may never be an empty seat next to the King, so  when the King attends a lecture and the person sitting next to him gets up to deliver a speech, then immediately somebody will move next to the King. This is all arranged beforehand of course. Queen Juliana detested Protocol. For instance, if she would visit  a theatre, she would say: ‘Just pretend I’m not here.’ Consequently all the people would  get confused and had to improvise. Should they help her into her coat, or not, that kind of thing. Protocol is useful and helps everything  to run smoothly. Queen Beatrix understood this and when she succeeded her Mother, Queen Juliana, she changed it, as she knew: Protocol ensures an orderly organization.”

Q: I understand discretion is of the utmost importance in your position. Still, is there perhaps an anecdote, some small tidbit about HM the King, that you can share with the readers?

A:  “During the trip to Germany the King also visited the Opel-factory. There was a  hall filled with Opel-employees and the King was seated on a separate stage together with a number of people, who were selected beforehand. After a while the King turned around to the group of people, who were not on the stage and started talking to one of them. You could clearly see how delighted that person was. In this instance the King broke the protocol, but in a very nice way. Everybody was very excited. I would also like to mention the advantage of Monarchy. Monarchy brings stability and continuity, because a King or Queen will be there for 20 or 30 years, whereas Prime-Ministers come and go. We have had the House of Orange for centuries and they also mean identity. We are a small country and the Royalty gives us that extra myth, tradition and the  fairytale-aspect. People need the fairytale-aspect.”