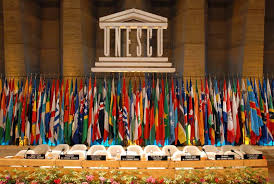 May 2014 marks the 60th anniversary of the UNESCO 1954 Hague Convention for the Protection of Cultural Heritage in the Event of an Armed Conflict. In 2014 the Netherlands National Commission for UNESCO, in collaboration with Blue Shield NL, the Peace Palace Library, Flemish National Commission for UNESCO and Heritage Agency Flanders an international photo exhibition portraying the impact of war on cultural heritage paying special attention to the importance of heritage protection in times of armed conflict. The Commission organizes a unique outdoor photo exhibition ‘Culture under Attack’. This exhibition focuses on the impact of armed conflict on societies and their heritage. The photos selected for this exhibition show scenes from recent conflicts and the devastating level of destruction of cultural heritage. They emphasize the resilience of the affected societies and their efforts for reconstruction.

The convention was drawn up and adopted during the intergovernmental conference of UNESCO at the Peace Palace in the spring of 1954 in The Hague. The international acknowledgement of the need for such an agreement followed the destructions of the First and Second World Wars. By ratifying the Convention and its two Protocols, Member States of UNESCO created rules to protect cultural properties during armed conflicts. The Convention was the first international binding treaty in this field, and it emphasizes the importance of a common responsibility for the protection of cultural properties. It also refers to the notion of ‘heritage of all mankind’.

Currently, over 126 Member States of UNESCO have ratified the convention. Worldwide, thousands of blue-shields, attached to the facades of buildings of great historic, cultural, religious and social significance, and to other cultural properties that hold valuable collections (such as museums, archives and libraries), refer to the existence of this international agreement. Despite its importance, the larger public is often unaware of the existence of the UNESCO 1954 Convention.

This needs to be changed, as today, the Hague Convention is the only, and therefore the most important binding international instrument for the protection of cultural heritage in times of armed conflict.

The exhibition will be shown from May 10 until June 15, 2014 in The Hague on the Lange Vijverberg, next to the Hofvijver, in the city centre of The Hague.

For more information, please contact the Netherlands National Commission for UNESCO at +31 70 42 60 263 or send an e-mail to kspitz@unesco.nl