The Festival Classique The Hague 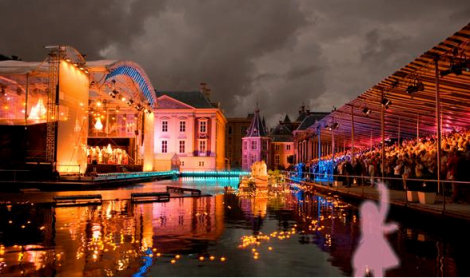 In June, Festival Classique let’s The Hague sparkle again with classical music! The 8th edition of the festival takes place from 18th to 22nd of June. The concerts range from large-scale performances by The Hague Philharmonic on the festival’s floating main stage on the Hofvijver, to small and intimate productions in a synagogue and other unusual venues.

This year the source of inspiration for The Hofvijverconcert was home grown! The show was an homage to the beautiful Dutch paintings of the seventeenth century, of which many can be seen in the Mauritshuis, next to the Hofvijver.

Thanks to the gracious invitation of H.E. the ambassador of Norway, Mrs. Anniken Ramberg Krutnes of The Royal Norwegian Embassy we had a wonderful evening. First drinks were served in the tent on the Plein, then we went all together to the Hofvijver to see and hear this beautiful concert with ballet.

Steered by the amazing music of (among others) Nielsen and Respighi, we sailed through the magical seventeenth century, which was starting to unveil its secrets; took a peak in the history of the Mauritshuis, which was once a cabinet of curiosities. Look at the objects of the collection and the paintings by Dutch masters Potter, Rembrandt and Vermeer. The Girl with a Pearl Earring came to life on the Hofvijver stage. The paint may be cracked a little, but her beauty is still leaving everyone enchanted.

The music was played by The Hague Philharmonic, conducted by Eivind Gullberg Jensen. The Slovenian Mezzosoprano Barbara Kozelj replaced in an excellent way and on short notice Cora Burggraaf, who had fallen ill. 155 (onefivefive), Codarts Rotterdam and Jérôme Meyer and Isabelle Chauffaud blew you away with a spectacular dance choreography by Neel Verdoorn. The Hofvijverconcert was presented by non other than Frits Sissing.

The evening found its end with a delicious walking dinner in Norwegian style back in the tent on the Plein.