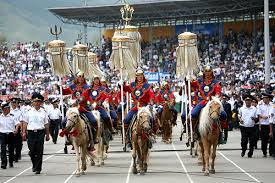 This time we would like to seize a momentum to introduce a little bit about the ‘’Naadam’’- the main event to celebrate the National Day of Mongolia which is July 11, and one of the most famous and gorgeous festivals and holidays in Mongolia. The festival is also called “Three Games of Men” as it consists of three sports of strengths, wisdom and courage, namely wrestling, archery and horse racing which is much loved and most watched festival in the country.

Nowadays, Naadam is celebrated from July 11-13 nationwide and its main events are taken place in the capital city Ulaanbaatar where the Grand opening ceremony begins with a ride of soldiers dressed in medieval outfit, bearing Nine Banners of Changes Khan, and the President makes an official opening speech, followed by a spectacular performance of dancers and musicians in costumes representing all ethnic groups in Mongolia, which attracts many people from across the country and guests from abroad.

This year we are celebrating the 2223rd anniversary of the founding of the first Mongolian State, the 808th anniversary of the Great Mongol Empire and the 93rd anniversary of the Mongolian People’s Revolution. Besides the main events of Naadam – wrestling, archery and horseracing competitions, many other activities such as ceremonies for showing respect to Chinggis Khaan and observation of National Flag Day, ceremonial concerts and cultural performances as well as knucklebone shooting tournament and variety of entertainments, including night shows and firework, are organized for the general public during these days.

Naadam festival is an ancient tradition and culture of Mongols with a history of almost 2000 years and profound links in everyday life of nomads who populate the vast territory of Mongolia. For nomads, who were roaming steppes and hills under eternal blue sky to herd a livestock, added with a necessity to hunt and sometimes to overcome not only natural severities but also to fight each other, it was essential to have good skills and mastery of riding horses, archery and even wrestling in order to survive. These skills and cum-savvies were of great value and help for Mongols to conquer and build the biggest land mass Empire the world ever knows.

Having Naadam as the State Ceremony dates back to the end of XII and beginning of XIII centuries when the celebration came into tradition since 1206 when the Great Mongolian Empire was proclaimed and Temuujin was enthroned as Chinggis Khaan. Since then, the tradition to celebrate Naadam has continued for centuries in one fashion or another, and survived many changes of overlordship.

With spread of Buddhism, Naadam was organized during ritual ceremonies to worship mountains cairns. There was also Naadam of ten overlordships, which survived until 1921. In 1922, one year after 1921 revolution, the first nationwide Naadam was organized in Ulaanbaatar and was recorded in history as an Army Naadam. Since then Naadam became an annual official celebration of the National holiday in Mongolia and organized every year in July.

Mongolian style wrestling is most popular sport in the country, and as historians claim, it was originated some seven thousand years ago. The technique and ritual of Mongolian wrestling is distinctly national. There are no weight categories or age limits. The contestants flap their arms in imitation of falcon, hawk and garuda and slapping on thighs showing the readiness to test their strengths without harbouring thoughts of revenge, regardless the outcomes of the match. The aim is to knock the opponent off balance and throw him down, making him touch the ground with his elbow and knee.

Traditionally, 512 wrestlers participate in the competition to test their strength and tricks while 1024 wrestlers may participate on the occasion of great anniversaries. Mongolian wrestling is untimed competition, usually composed of an average of nine rounds of fights. Those who lost are eliminated from further rounds and winners earn glorious titles depending on how many rounds they win in the national Naadam. A wrestler who wins five round earns a title of “Falcon”, one who wins six rounds gets the title of “Hawk”, the winner of seven rounds receives a title “Elephant””and of eight rounds the title of “Garuda”. The winner of nine rounds is called “Lion” and two times “Lion” becomes Champion. Every subsequent victory will add an epithet to the title of Champion like Supreme, Nationwide and Invincible.

Mongolian archery is unique and has been an integral part of nomadic life. Bows are very stiff and hard to bend. The method of making bow and arrow has retained the national tradition to date, and its making takes many days or years.

Traditionally, women were not competitive archers but in the last two decades they have been more and more included. The usual archery contest is between teams, each of 5-7 archers, aiming at a line of 33 leather cylinders from a distance of 75 meters for men and 60 meters for women in a series of knock-out rounds. Men shot 40 arrows and women 20 arrows. The number of target cylinders is reduced as tournament progresses until in the final there are only three. The distance, which was about 200 meters till recently, has been reduced to around 70 meters.

Judges stand to each side of targets, and each time the archer prepare for shot, they begin to sing ancient song ‘’uukhai’’. When the arrow hits the target, judges make a sign with hands to indicate the result. The winners at the national Naadam festival are granted the title of ‘’Mergen’’ (marksman or markswomen). Every subsequent victory at national Naadam will add an epithet to the title like Super, Miraculous, Most Scrupulous, Nationally Memorable and Invincible.

Horseracing also roots centuries back and has its Mongolian specifics. In average, 400 horses of six age categories, or 2400 horses participate in 2 days racing in Ulaanbaatar. It is surpassing 26 000 horses participate in a race all over the country. The length of each race is determined by horse’s age. Horses run for 20-30 km over open grassland with to set rack or course ridden by child over 7 years old.

The winning horse earns a title of ‘’Leader of ten thousands’’ and the top five horses in each class earn the title ‘’airgyn tav’’ and top three are given gold, silver and bronze medals. Hardening a horse for race requires skills and experience from a trainer who also is bestowed a titles depending on how many times the trained horse win or came into top five in national and regional competitions. A paean is recited for the winning horse as well as first five finishers.

In June 2003 the Parliament of Mongolia adopted a law on Naadam which states that “Naadam is a great traditional festival of the nation symbolizing sovereignty and independence of Mongolia”. Therefore, the Naadam is an important festival and cultural heritage of Mongols that had been preserved from ancient times from generation to generation, and deeply linked to the identity and very existence of the nation through its long history and traditions.

Summer in Mongolia is most favourable season in the year to travel and rest, while July is most visited time by tourists as Naadam takes place in this month. The Embassy encourages all of you to visit Mongolia and experience magic natural beauty and the great history of Mongolians, have first-hand information on recent economic developments and livelihood of modern Mongols.