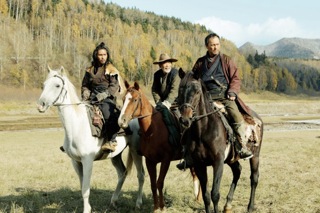 Camera Japan, the largest festival for Japanese film and anime in the Benelux, will present two strong works featuring star actor KUNIMURA Jun (Kill Bill, Hard Boiled, Audition): LEE Sang-il’s Unforgiven and SONO Sions Why Don’t You Play in Hell? The festival takes places Thursday 2 till Sunday 5 October at Rotterdam’s LantarenVenster. Part of the programme will be screened at Amsterdam’s Kriterion from Friday 10 till Sunday 12 October.

Movie buffs and those interested in Japanese or Asian culture already know their way to CAMERA JAPAN: since 2006, the festival attracts growing audiences with a programme of about thirty new and classic, fictional and documentary feature films, anime and short films. CAMERA JAPAN offers a broad overview of romance, samurai, comedy, yakuza, sci-fi, topical issues and animation. Find news about CAMERA JAPAN and, from 1 September, the full programme as well as box office information at camerajapan.nl and facebook.com/camerajapan.

Unforgiven& Why Don’t You Play in Hell?

CAMERA JAPAN proudly presents Unforgiven (2013, trailer) directed by LEE Sang-il (69 sixty nine, Hula Girls, Villain). Jubei (Ken Watanabe, Inception) has left behind his past as a contract killer, but struggles to feed his children. He finds himself forced to join his old friend Kingo for a double man hunt to the town where the sadistic and power-hungry Oichi rules. This very apt remake of Clint Eastwood’s western features a strong cast including KUNIMURA Jun and breathtaking cinematography. A must-see for all genre fans!

In his 31st film Why Don’t You Play in Hell? (2013, trailer) controversial filmmaker, writer and poet SONO Sion reaches new heights of gushing blood and hilarious situations. The plot tells about a young director who makes a film starring the daughter of a yakuza boss (KUNIMURA Jun). Her mother, soon to be released from prison after murdering a rival yakuza, should believe her daughter is world famous. SONO describes his new work as an ‘action thriller about the love for 35mm film’. Infusing his trademark excess and outrageousness with affection for Japanese cinema, this is SONO Sion at his most endearing and awesome.

At LantarenVenster, a series of short live performances takes place in the evening. In the foyer a small pop-up mall offers a range of Japanese products; after 22.00 hours, Japanese finger food is available. On Sunday morning, the festival starts with the popular Film Brunch.

On Sunday, children of six years and older are welcome to take part in CAMERA JAPAN Kids’ Day. The Kids’ Day-programme includes short films and a make-your-own-robot workshop.

CAMERA JAPAN is organised by about fifteen enthusiastic voluntary staff members. During the festival, additional volunteers welcome audiences, filmmakers and other festival guests. CAMERA JAPAN is supported by the City of Rotterdam, Netherlands Film Fund, Rotterdam Festivals, Fuji Film and many other business partners.