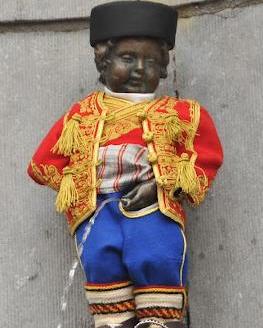 To celebrate the Statehood Day of Montenegro (Dan državnosti) the Montenegrin mission resident in Brussels provided the national costume of their homeland to dress up the iconic Manneken Pis in the historic city centre of Belgium’s capital. The Mannekin Pis wore it on 10 July 2014 from 9 am to 4 pm.

Later in the evening HE Ambassador Vesko Garčević co-hosted a concert followed by a diplomatic cocktail in the premises of his embassy.  The Embassy of Montenegro resident in Belgium is also accredited to The Netherlands, Luxemburg and the OPCW. Montenegro has an honorary consul in Maastricht.

Statehood Day on 13 July does not celebrate the independence of Montenegro, but rather commemorates the day in 1878 wherein the Berlin Congress recognised Montenegro as the twenty-seventh independent state in the world. Moreover the revolt in 1941 that Montenegrins staged against the Nazi occupiers.

Montenegro regained independence on 21 May 2006 after a successful referendum on the matter which dissolved the Union of Serbia and Montenegro. The country lost its sovereignty to Serbia towards the end of 1918 after the dethronement of King Nikola I of Montenegro. The latter was the only victorious loser of the Great War as he was deposed in spite of being ruler of one of the Allied states.