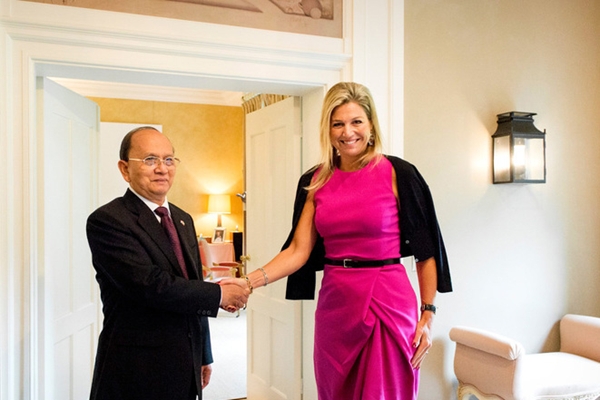 His Excellency President Thein Sein of the Union of Myanmar is on a two-day official visit to the Kingdom of the Netherlands after a visit to Switzerland.

President Thein Sein is accompanied by his personal representative Ambassador Paw Lwin Sein (based in Brussels) and a delegation meant to boost Dutch-Myanma trade relations, particularly in water management and horticulture.
Minister of Infrastructure and Environment, Schultz van Haegen, shows the delegation about the Maeslantkering, a storm surge located at the Hook of Holland.  Minister Ploumen of Foreign Trade and Development Aid offers a lunch on behalf of His Majesty’s Government at the Catshuis with focus on trade and development aid.
On 9 September 2014, the President of Myanmar was received in an audience by Prime Minister Rutte at the Ministry of General Affairs. President Sein was also granted an audience with His Majesty King Willem-Alexander at Noordeinde Palace. Her Majesty Queen Máxima was not present at the audience in Noordeinde but likewise welcomed President Sein and his delegation separately at Villa Eikenhorst in Wassenaar in her capacity as special representative of the UN Secretary-General for inclusive finance for development (UNSGSA).
Myanmar used to be known as Burma up to 1989 when the military government changed the country’s name. The name change has not been officially recognised by a plethora of countries.  Myanmar has an Honorary General-Consulate in Breda.
Share
Facebook
Twitter
Pinterest
WhatsApp
Previous article
OPCW- Chlorine Gas Used as Weapon in Syria
Next article
African Diplomats Meet&Greet Sept.11th
- Advertisement -