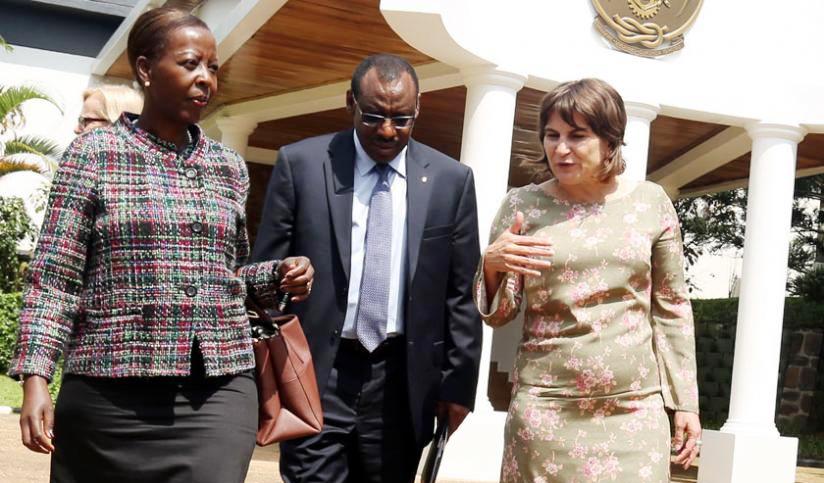 President Paul Kagame met recently with the visiting Dutch minister for Foreign Trade and Development Cooperation Lilianne Ploumen with whom he discussed existing and potential partnerships between the two countries. The discussions revolved around bilateral trade and diplomatic cooperation, officials said.

Speaking to reporters, Ploumen said her government wanted to go beyond the traditional aid relationships and partner with the country toward sustainable economic development. Ploumen is heading a high-level Dutch delegation, mainly composed investors who said they came to explore investment opportunities in Rwanda.

The delegation includes senior executives from at least 30 Dutch companies with interests in agribusiness, logistics, energy, hospitality, horticulture, real estate, among others.

“For us to be able to forge strong economic partnerships with Rwanda, we must get to know each other, establish contacts which we believe will result into strong economic ties,” Minister Ploumen said.

She urged Kigali to invest in small and medium enterprises saying such businesses help fast-track economic growth. “We are impressed with the ongoing investments being made in terms of exploiting of methane gas in Lake Kivu and other infrastructure projects; this we believe is key to the country’s economic growth.” The aim of this mission is to facilitate new alliances and identify new opportunities that will benefit the two countries, she added.

Louise Mushikiwabo, the Minister for Foreign Affairs, who attended the meeting, held at Village Urugwiro, said: “Government presented to the Minister and the delegation the various investment opportunities but also discussed with Dutch Minister on how to scale up investments in the coun-try’s airport projects and horticulture.”

We believe this is an opportunity for both governments which will help fast track economic development, Mushikiwabo added.

Claver Gatete, the Minister for Finance and Economic Planning, said that strengthening economic ties with the Kingdom of Netherlands was important for the country’s devel-opment.

“We want to move away from foreign aid dependency and it’s through building trade partnerships and promoting investment that we will reach this goal,” he said.