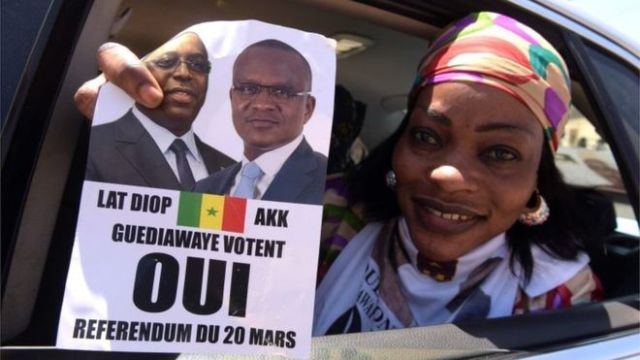 The Senegalese have voted to shorten presidential mandates from seven to five years from 2019, according to the results of Sunday’s March 20th referendum. The move comes at a time when many African leaders are trying to cling on to power by extending their time in office.

The electoral commission said 63% had approved the changes proposed by President Macky Sall, only the fourth president since independence from France in 1960. Turnout was 38%. The leaders of countries such as Burkina Faso, Burundi, Rwanda and Congo sought to extend their rule last year. Such moves have triggered violent protests in Burundi and Congo.

Mission of Senegal to the EU, Embassy to Belgium and Luxembourg (HE Ambassador Amadou Diop): http://www.ambassadesenegal.be

Embassy of Senegal to The Netherlands and Denmark, Mission to the OPCW (HE Ambassador Maymouna Diop Sy): http://www.ambassenelahaye.com/index.php/fr/