Mexico at the Diplomats Gastronomic Festival 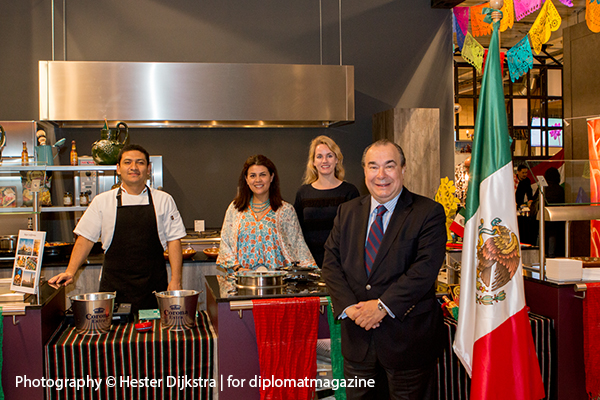 “From casual dishes to elegant recipes from around the world, taking Mexican beyond guacamole….” as wrote our reporter Viviana Knorr, the 1st Gastronomic Diplomatic Festival at Hanos, was a real success.

“The traditional cuisine of Mexico, registered by UNESCO in the List of intangible cultural heritage is a fundamental factor of cultural identity, social cohesion and community development.

Also, it is a living representative cultural manifestation of humanity for its antiquity, historical continuity, originality of its products, techniques and procedures. Mexican cuisine is elaborated and is loaded with symbols.”

“Besides, Mexico brings the world many products with Denomination of Origin Qualified; it has an important gastronomic offer that contributes to the economy of the country: 515,000 restaurants, three of them among the top 50 in the world.

The restaurant industry is one of the main sources of income of Mexican households throughout the country and one of our biggest tourist attractions. It generates more than 5.5 million jobs in Mexico.

Its positive impact benefits more than 80 branches of the economy and, in fact, more than 500 thousand restaurants registered contribute two percent of the national gross domestic product, generating wealth in our country.

Mexico is famous for its gastronomy. But beyond tacos and guacamole, which are internationally renowned, there are very rich and varied culinary traditions throughout the country.”

“President of Mexico, Enrique Peña Nieto, announced in August 2015, the Policy of Promotion of National Food. This Policy seeks to make this sector a more dynamic and comprehensive on a solid economic platform of broad social benefit. The objectives are to strengthen the chain of gastronomic value, support and link all those involved in this important activity.

Also, a Mexican brand was created, and it has been called Ven a Comer to support the new national geographical gastronomic routes, as well as to promote innovative and modern culinary strategies abroad.”