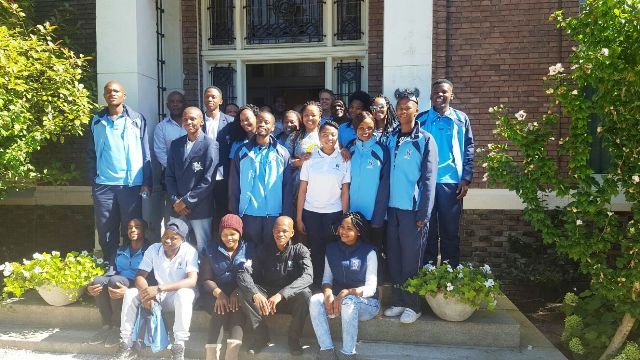 On Tuesday 23 August 2016, H.E. Mr. Vusi Bruce Koloane, Ambassador of the Republic of South Africa to the Netherlands, hosted a luncheon for a group of newly arrived South African students.

The students were accompanied on their journey by Mr. Caiphus Chauke and Ms. Eugenia Mwale, both of the Ekurhuleni Metropolitan Municipality. Only hours after landing at Amsterdam airport, the students were taken to the residence of Ambassador Koloane where they were welcomed by the Ambassador and his spouse Ntokozo Patience Koloane, Ms. Namhla Gigaba, Counsellor and Mr. Lindsay Louis, 3rd Secretary of the Bilateral Department of the Embassy. Also present at the residence were Drs. Elske van der Wal and Mr. Bas Groot of Breda University.

The arrival of the 19 students from the Ekurhuleni Metropolitan Municipality in South Africa is the result of what had started with a seminar name operation Phakisa.

The Embassy of the Republic of South Africa in conjunction with the STC-Group held the seminar in Rotterdam on 6 Jun 2016. Ambassador Kolane noted that he was pleased with the cooperation involving Breda University of Applied Sciences NHTV lead by its Director Mr. Hein van Oorschot for the M.O.U which was about to be signed with the Municipality of Ekurhuleni and Dr. Nkosidinphile Xhakaza.

Phakisa means to hurry, and indeed, in less than three months following the signing of the M.O.U, the agreement is bearing fruit.

Mr. Thulani Masilela in charge of rolling out Operation Phakisa, reported Phakisa’s aim is to strengthen public accountability and transparency.

Phakisa provides great opportunities for partnerships between the private and public sectors, and draws civil society and communities into developing solutions together.

The M.O.U. signed between the Ekurhuleni Metropolitan Municipality and Breda University of Applied Science NHTV is to be considered the first step in a long lasting relationship between the University of Breda and a municipality in South Africa, in collaboration with the Association of Dutch Municipalities, VNG International.

The Municipality of Ekurhuleni has lots of manufacturing activities, and thus it is no wonder the vibrant Ekurhuleni is referred to as the workshop of the country.

One of the 19 fresh water students is Bokang, who finished high school some years ago and has since had many jobs. Earlier this year, Bokang opened an IT bureau. Bokang is also the author of a book entitled “Are you the right mind, heart or limbs for that business” (available on Amazon). Bokang has for the coming four years shifted his attention towards obtaining his Bachelor degree from Breda University in order to enhance his prospects.

Like Bokang, the rest of the group has similar aspirations. Asked whether he had met the other members of the group before, he explained they had been like family since meeting one another. This close-knit group is motivated and determined to obtain their Bachelor degrees and return to Ekurhuleni to work in logistics.

The motivation of the students has an obvious effect on Breda University’s lecturer Drs. Elske van de Wal. She recounts how this particular program developed. With the involvement of Mr. Bas Groot and other colleagues, the cooperation between Breda and Ekurhuleni will doubtless become a success.

The group of students will be kept together, with independent living quarters and a monthly stipend. There will be regular evaluations. Besides logistics, students will be given training in entrepreneurship, enabling them to start their own businesses should they decide to do so.

The Ekurhuleni Metropolitan Municipality is financing the project. All that is required of the students is to return home to Ekurhuleni and work for four years after completing their degree. 80% of the students are not in the position to finance their studies themselves, and are from single parent families. The Ekurhuleni Metropolitan Municipality hopes to have its own Centre of Excellence one day.

Mr. Caiphus Chauke head of Department of Economic Planning & Aerotropolis Development has in his portfolio: attracting investment, business and education to the municipality and region. According to Chauke, his Municipality is not limited to cooperation with Breda. He is also eyeing Gemeente Harlemmrmeer where Schiphol is located.

An impressive piece of cooperation between a city (city diplomacy) and an educational institution located thousands of kilometers apart. The South African Government’s Operation Phakisa looks set to be a success.