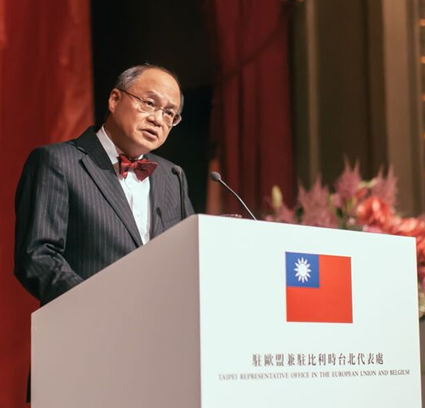 The Republic of China, the first republic in Asia celebrates its 105th National Day on the 10th October. Over the past 105 years we have witnessed the tremendous transformation and development of my country, as it has changed from an authoritarian system into a liberal democracy, and from an agricultural society into a knowledge-based economy. After a century-long endeavour, the Republic of China on Taiwan has proved to be a role model of democracy for all the Chinese people in the world.

This 105th year also marks a new beginning for my country’s politics. This January’s general election led to our third-ever peaceful transfer of power, and a female president was elected for the first time. In her inaugural address on May 20th, the new president, Madame Tsai Ing-wen, committed her government to transforming Taiwan’s economic structure: strengthening the social safety net; realizing social fairness and justice; ensuring peaceful and stable development in the region, including by properly managing cross-Strait relations; and contributing to the global agenda through diplomatic outreach.

In parallel with its dynamic democratic development, Taiwan’s vibrant economic performance maintains good standing, though affected to some extent by the sluggish growth of the world economy in recent years. Last year Taiwan – the 27th largest economy in the world- had a GDP of US$524.5 billion, which was similar to Belgium’s. As the 17th largest exporter and 18th largest importer worldwide, last year Taiwan’s trade with the European Union, the fifth-largest trading partner of Taiwan, reached US$46.5 billion, accounting for 9.1% of Taiwan’s total trade value. Within this, Taiwan-Belgium trade amounted to US$1.68 billion.

Furthermore, a new development has provided encouraging impetus to our economic ties with the European Union. We were happy to learn that the European Commission released its new trade policy strategy for the period of 2015-2019 last October, stating that it will explore launching negotiations on an investment agreement with Taiwan. In endorsing the Commission’s strategy, in July the European Parliament adopted a resolution that urged the Commission to immediately start these negotiations. I am convinced that an EU-Taiwan bilateral investment agreement would greatly benefit us both, and move us towards an even closer partnership.

However, apart from mutual economic interests between us, our strong relationship has been formed by deep-rooted likemindness, and an attachment and adherence to shared values of freedom, democracy, respect for human rights, and the rule of law. Over the years, we have been deepening relations with European countries, including Belgium and Luxembourg, cooperating in an array of fields such as education, climate change, green energy, cybersecurity, homeland security, gender equality, and many others. Overall, as Taiwan and the European Union have been growing interdependent, only by working together can we adequately and effectively respond to the many crises and challenges we are facing nowadays.

Taipei Representative Office to the EU and Belgium: http://www.roc-taiwan.org/be_en/index.html

Photography by Press Division, TRO in the EU and Belgium.