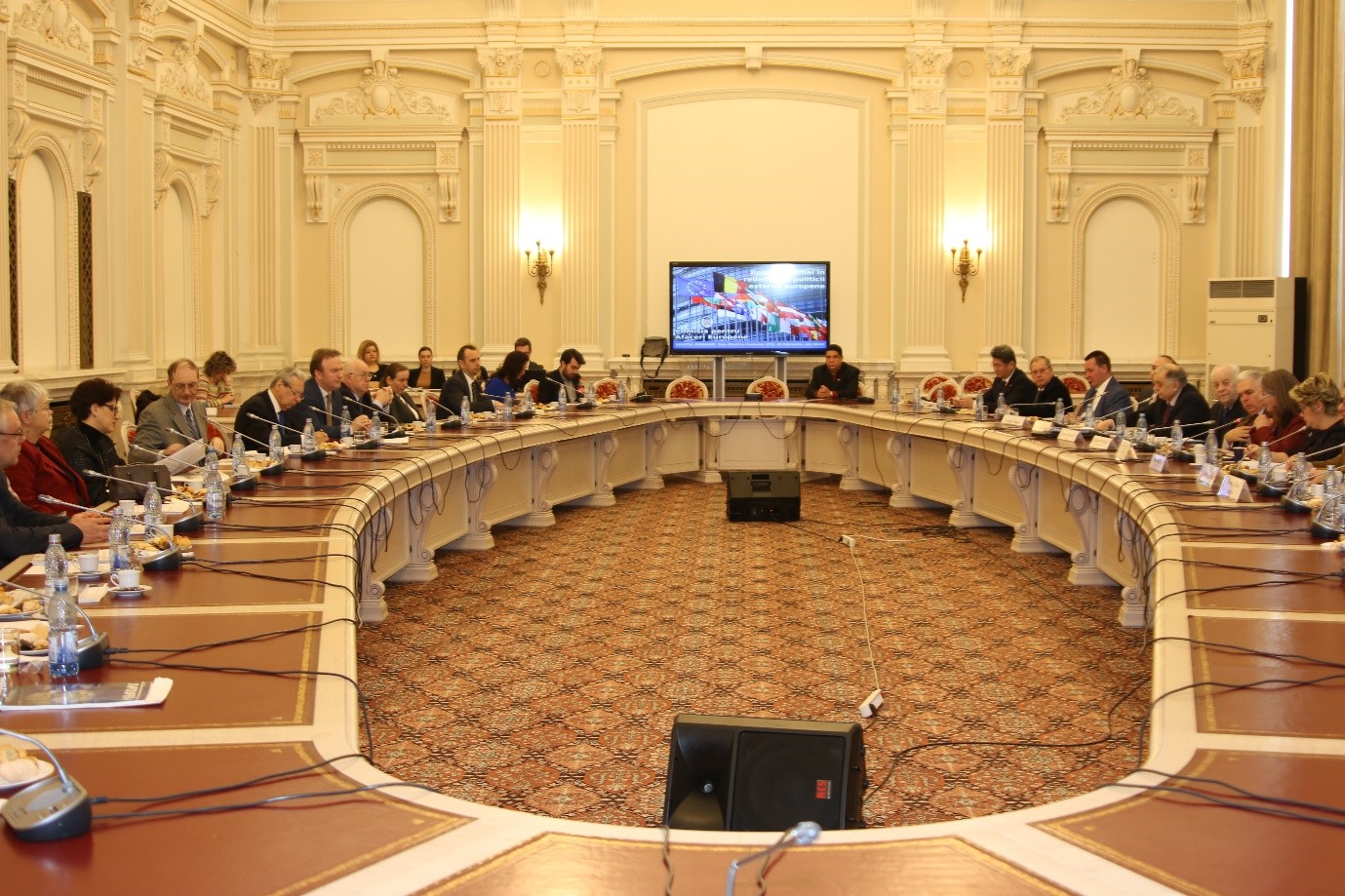 A brief description of the current geopolitical situation and its prospects

In the last decade the strategic, political, economic, military, enery and technological balances were strongly affected by global challenges, strategic, political, juridical and technological disruptions each one impacting on one or several fields. Human society is in a evolutionary crisis which the main international traditional players are not able yet to manage properly and each one of them seeks to position itself as profitable as possible in anticipation of a new world order in a globalised world. The developments are fast and often momentuous, and as one of the attendee noted – important geopolitical events that occured in the last two months are equaling the ones that took place in the last decade.

Geopolitics should be reformed. The economic maps are no longer overlapping the political ones. The emergence of digitalisation with an extraordinary importance, means an era and a space that the states do not control any longer, will bring hard to foresee developments on the world’s stage. The truth according to which states live in markets and not the markets live in states, although acknowledged, is not fully understood and politics did not identify yet valid solutions for taming the globalised capitalism.

However, the globalizing world is encountering now a new threat, the outbreak of a pandemic, inflicted by COVID-19, and for which it is not sufficiently well prepared.

Under the circumstances, the idea that the European Union (EU) is lacking a clear vision about its future is prevailing and visionary leaders with popular appeal are missing. As a German friend said,  Ursula von der Leyen knows how to submit interesting projects yet she is not able enough to implement them. It is the case of The European Gren Deal project[3] which is supposed to be finalized by 2050 and devised to unite all European capabilities for a shared objective and has hindrances since its launching as a result of the costs and social and technological implications it presumes.

On the other hand, the EU has other stringent problems, too such as the new threat of Syrian and North African migrants[4], Russia’s and Turkey’s expansionist policies, the threats represented by techological evolutions and especially the Artificial Intelligence (AI). A Compact  concerning Europe’s future is needed more and more yet there is a reservation of its states with regards to promoting an institutional reform.

One of the attendees said at the end of his speech that these are but some major examples of important actions the EU should have in mind and added that the Union is “an economic giant, a political dwarf and a military little mouse”. The wording includes indeed upward and downward exaggerations in all three fields.

Not in the least, the position of EU’s High Representative for Foreign Affairs and Security Policy created in 1999 by the Treaty of Amsterdam and thereafter enhanced through the Treaty of Lisbon in 2009 when the holder became vice-president of the Commission too, is important for achieving the European foreign policy. If Javier Solana (1999 – 2009) was well experienced in foreign policy, same cannot be said of his successors: Catherine Ashton (2009 – 2014 was previously a European Trade Commissioner and a leader of the House of Lords only) and Federica Mogherini (2014 -2019 was before Italy’s Foreign Minister for eight months and member of the Chamber of Deputies for one and a half year only). From 1st December 2019, the position is held by  Spain’s Josep Borell Fontalles whose experience in the field of foreign relations we hope to be useful during his just begun mandate.

Did a question attributed long time ago to the former US Secretary of State Henry Kissinger: whom shall I call if I want to talk to Europe (the EU)? has finally found an answer? Probably yes,  formally speaking. Yet it is not clearly enough to whom the US president  should speak.

Defining the national interest and the objectives of the foreign policy should be done by the parliament. We use to that purpose the past experience so that Romania could become an as convincing as possible voice internationally. The government and the Ministry of Foreign Affairs should be the main artisans of the Romanian foreign policy and the president should observe (just like the rest of the state’s institutions) the constitutional duties.

After joining the EU, Romania suffered an identity crisis in its foreign policy. We had “a cheap approach” folded on Germany’s and US’s approaches. Our attitude of  permanently being concerned with getting a better appreciation by the EU’s leadership is a wrong one. I believe that in this regard, Nicolae Titulescu’s position[5]who said: ”A country’s foreign policy is devised by rational assessment of the national standpoint, by defending it  firmly and and in a dignified way internationally and not by signatures provided by the fear of differentiating yourself, signatures that might spell today but which bind you tomorrow.”

It seems that this quote was forgotten alltogether today by the Romanian politicians as the positions they adopted externally and the UE’s actions, too, left the impression that Romania is a Union’s second class member, something that should be changed. The EU;s recommendations concerning Romania expired in 2010 and were not updated while the EU’s leadership and its members seem to be content with that as long as they do not update it.

It is necessary we regain the sovereignty within the EU and an equal position with the other states. In this respect, we should get closer to other states having similar problems with ours.

Romania’s rotating presidency of the European Union Council during January 1st – June 30th 2019, proved its capacity to deliver in very good conditions (according to the UE’s bodies appreciation. We should devise from now on and, at the same time, to implement the resolutions.

Romania should adopt a more active position within the EU, support the strategic partnership with the US, put forward our standpoint concerning the American peace plan in the Middle East, have more initiatives in approaching the main issues and UE’s political decisions including following up its national interest as the other member states do.

Romania could further contribute to the development of the EU’s relations with countries of the Middle East given the former’s experience until 1989 with numerous Arab countries. Unfortunately, during the last 30 years that area has been extremely neglected by the Romanian policy and diplomacy, give aways and compromises have been made without any clear gains we might have obtained[6] so that, if we do not act now we will be forgotten in the Middle East within the next 5-10 years. The generation of the Middle East’s politicians under 40 years old are no longer familiar with Romania.

Under today’s geopolitical circumstances, we have to add substance to the US’s strategic partnership yet, at the same time, we should not stay away from defining our partnership with China, which we have traditional relations which seem to cool and follow the same course as the one with the Middle Easts’s.

The article includes personal opinions and standpoints similar to those with the undersigned positions expressed on this occasions and other mentions in recent analysis and documnts do not reflect in any way the opinion of the Commission on the European  Affairs of the Romanian Senate.

A highly decorated retired two-star general of the Romanian army, during two decades he has led one of the most influential magazines on geopolitics and international relations in Eastern Europe, the bilingual journal Geostrategic Pulse.

[1] This article has been caused following the author’s invitation and attendance of the round table  ”Romania’s Role in Redefining the European Foreign Policy”, organized by the Committee on Foreign Affairs (headed by Gabriela Crețu) of the Romanian Senate on February 25th, 2020. The invitation was extended through dr. Liviu Mureșan, Chairman of EURISC.

[3] The European Green Deal (Green Deal) aims at transforming the European economy into a neutral one in what concerns the impact on the environment by 2050. This ambitious program provides for investing 1tn euro during the next 10 years. Some experts estimate that the effects of this initiative on a global scale will be rather limited since Europe is not an important polluter globally.

Romania will benefit  from 757 ml euro (non-reimbursable EU grants) for supporting the mono-industrial areas which will be affected by the passage to a non-polluting economy.

Experts in the field estimate that Romania will have to annually allocate around 4bl euro for implementing this project which requires giving up roughly 25% of the country’s energy  capacities and replacing them by green ones.

[4]Turkey’s attempt to send a new migrants wave to Europe met for the time being with Greece’s and Bulgaria’s refusal to open their borders and the High Commissioner Josep Borell declared that the EU’s borders stay closed and the migrants should know that. In its turn, Germany declaread that the 2015 situation will not repeat  itself and the Austrian Chancellor Sebastian Kurz blames president Erdogan for using the migrants close to the Greek borders as weapons against the EU.

[5]Nicolae Titulescu, a brilliant Romanian diplomat, Romania’s foreign minister between 1928-1936, president of the League of Nations between 1930-1931.

[6]In 2005, for instance, Romania voluntarily adhered to the Paris Club’s reccomendation and  diminished its then Iraqi outstanding debt  of $2.6 bn by 80% and accepted Baghdad’s payment of the remaining in annual instalments until 2028 with a 5 years grace period.

Romania observed Lybia’s embargo, although during the 1980s the commercial exchanges between the two countries exceeded annually $1bn and gave up exploiting oil bloks  where it had successful oil prospections and annuled even the direct  air links between Bucharest and Tripoli, while European important countries were convening and carring out important contracts with Qaddafi.