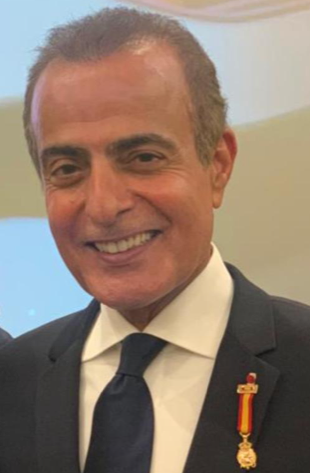 Tuesday, 1 September 2020, Madrid, Kingdom of Spain: The Spanish Council of Ministers consented to bestow the Grand Cross of the Order of Isabel the Catholic to erstwhile Qatari Ambassador to Spain, Mohamed bin Jaham bin Abdulaziz Al Kuwari, now serving as his country’s head of mission to Germany.

Al Kuwari served as chef de mission in Spain between 2017 and 2019 before passing on the post to Ambassador Abdalla Al Hamas. During Al Kuwari’s farewell allocution, he particularly thanked Spain for supporting Qatar in the aftermath of the blockade imposed by neighbouring countries.

The Orden de Isabel la Católica is a Spanish civil, stately order wherein membership is granted in recognition of services that benefit the country. Nowadays it is the order given in particular to those individuals promoting Spanish relations with the international community. The order was instituted by King Ferdinand VII on 14 March 1815. Today the order’s Grand Master is King Felipe VI, and its chancellor the Spanish Foreign Minister, Arancha González Laya, both ex officio.

The grand cross granted to Ambassador Al Kuwari is of the first rank, entitling him to i) personal nobility, and ii) the predicate of ‘Excelentísimo Señor Don‘ (Most Excellent Lord) before his given names.

Protocol of the Order of Isabel the Catholic: http://www.exteriores.gob.es/Portal/es/SalaDePrensa/Multimedia/Publicaciones/Documents/2011orden%20isabel%20la%20catolica_reglamento.pdf

Members in the Order of Isabel the Catholic: https://es.wikipedia.org/wiki/Anexo:Condecorados_con_la_Orden_de_Isabel_la_Católica#Gran_Cruz