President Agius concludes official visit to the Republic of Croatia 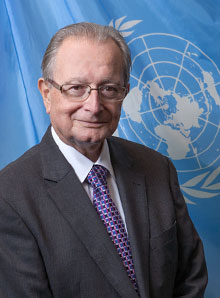 During the visit, President Agius met with Croatian Prime Minister Andrej Plenković, Minister of Justice and Public Administration Ivan Malenica, and State Secretary at the Ministry of Foreign and European Affairs Andreja Metelko-Zgombić. The Croatian Ambassador to the Kingdom of the Netherlands, Dubravka Plejić Marković, was also in attendance.

President Agius provided the officials with an update on the Mechanism’s current activities and discussed a number of other topics, including the importance of regional cooperation for domestic war crimes prosecutions, as well as cooperation of the countries of the former Yugoslavia with the Mechanism. The discussions also advanced progress on the establishment of an Information Centre on the International Criminal Tribunal for the former Yugoslavia (ICTY) in Zagreb, including in relation to its location.

As part of the official visit, President Agius also presented a lecture to students of the Faculty of Law at the University of Zagreb regarding the establishment and mandate of the Mechanism and the legacy of its predecessor Tribunals, the ICTY and the International Criminal Tribunal for Rwanda. Finally, the President attended an exhibition entitled “Sloboda se njegovim imenom zove” (“Freedom is called by its name”) at the National and University Library in Zagreb, which commemorates 30 years since the fall of Vukovar, and was shown part of the Library’s rare book collection.

This visit, originally scheduled to take place in April 2020, was the President’s first visit to the region of the former Yugoslavia since the outbreak of the COVID-19 pandemic.