Art exhibitions or continuation of diplomacy by other means 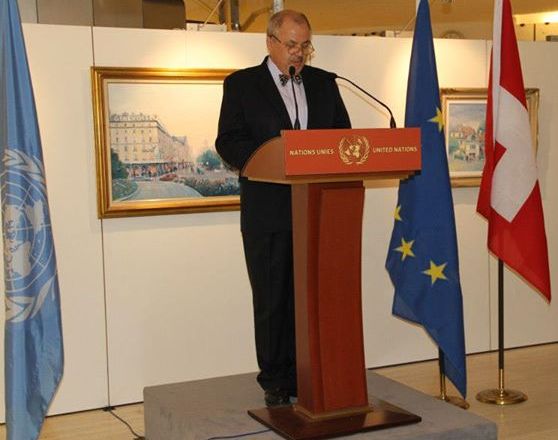 By H.E. Mr. Petru Dimitriu, Ambassador Permanent Observer of the Council of Europe to the United Nations Office and other international organizations in Geneva.

The Permanent delegation of the Council of Europe to Geneva is very proud of the series of art exhibition organized at its headquarters under the generic name of “European Roots”.

One can ask whether multilateral diplomacy ought to go beyond itself to statements in intergovernmental meetings, negotiations in formal or informal settings, and verbal promotion of the treaties concluded. This is a valid question for the Council of Europe too, whose main objectives are the promotion of the human rights, democracy and the rule of law. And it is all the more pertinent, if the working place is Geneva the capital of human rights, not Paris, where UNESCO works with people’s minds.

In order to offer a loud and sound affirmative response to the question above, one should not just assume but saddle up and take initiative.  This is how the exhibition entitled “The Soul of Landscape” took shape, showing to the diplomatic and non-diplomatic Geneva the beautiful artworks of the Italian artist Amedeo Besana.  To which I invite you right away. 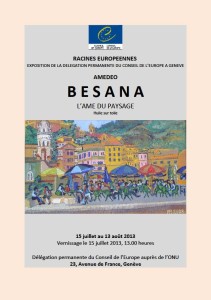 Indeed, the spirit of major legal instruments of the Council of Europe, such as the European Cultural Convention and the European Landscape Convention, can be promoted by legal, political and practical arguments, but artistic transfiguration could produce efficient and lasting understanding and support. Notably, the Council of Europe Framework Convention on the Value of Cultural Heritage for Society  (Convention 199, 2005) offers a convincing explanation for everyone wishing to understand the link between human rights and the cultural heritage which makes it very user-friendly for the human rights community in Geneva.

The States Parties to this Convention agreed to recognise that rights relating to cultural heritage are inherent in the right to participate in cultural life, as defined in the Universal Declaration of Human Rights and that the conservation of cultural heritage and its sustainable use have human development and quality of life as their goal.

The State Parties also agreed to promote an understanding of the common heritage of Europe, which as a source of remembrance, understanding, identity, cohesion and creativity.  The Convention says that “the cultural heritage consist of ideals, principles and values, which foster the development of a peaceful and stable society, founded on respect for human rights, democracy and the rule of law”.

The exhibition was intended to be a reminder of a convention that promotes the common cultural heritage which, among other factors, fosters the respect of all human rights.

In other words, continuation of diplomacy by other means. If we allowed the original phrase of Clausewitz to justify the war, I do not see why you would reject much innocent and well-meant paraphrase. But, certainly the exhibition was not just a diplomatic encounter. It was a high-quality artistic event. And, surprise, the conviviality between diplomacy and arts was even more pregnant.

The painter, Amedeo Besana, is a former United Nations staff who continues, in a very delightful way, by his art, to serve the spirit of the United Nations. He was born in Italy, as you all guessed by the sound of his name. But I bet that you would have identified anyway the nationality of the painter by the colours, the light, the joy of life and optimism he has brought with his canvasses. Amedeo Besana is not a professional painter; he is not prompted in his art by any predetermined agenda or material needs. He paints just to respond to his noble inner call to communicate his joy of life, his love for the places he has admired, and his desire to share with the rest of us his human feelings.

And all that gives to his art the fragile, but noble touch of spontaneity, as well as the powerful, but warm essence of authenticity. Amedeo Besana does not depict the scenes he brings to us from a distant, observing position. He is there within the landscapes in which he mixes not only colours, but also his soul. Can you see it?