Caravaggio in The Hague 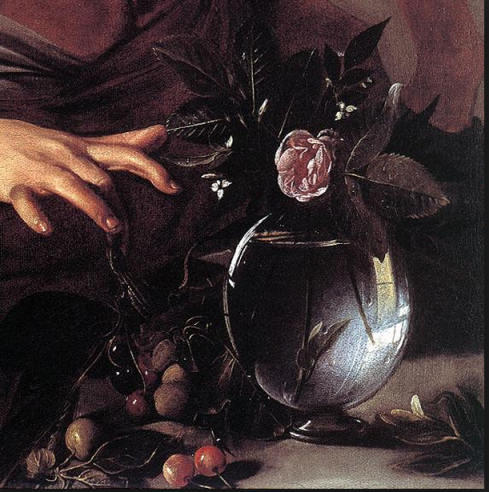 One of the true gems of The Hague, the undeservedly little known museum “Galerij Prins Willem V”, proudly presents Caravaggio’s early masterpiece “Boy bitten by a lizard”. The Galerij on the Buitenhof next to the museum “Gevangenpoort” (with which it shares an entrance) is the oldest public art museum in The Netherlands. Started with works from the private collection of Prince Willem V it opened its doors in 1774. It is quite small, just one long narrow gallery, but richly furnished in 18th century courtly style and … what a collection! Over 150 works by mainly Dutch and Flemish 17th century painters cover the high walls from floor to ceiling in the true style of the age. Luckily binoculars are provided. You’ll find works by Rembrandt, Jan Steen, Paulus Potter, Rubens and many others.
To bring the Galerij out from the shadows, Emilie Gordenker (of Mauritshuis fame) and her crew hit upon the idea of presenting one top work a year that is normally not to be seen in The Netherlands. It has to be a work fitting in with the collection of the Galerij itself, in period and quality. As the curator Ariana van Suchtelen explained, it is fitting that the first  work so borrowed was a work by Caravaggio, the pioneer par excellence of the claire-obscure style in the  Rome of around 1600. In “A boy bitten by a lizard” light and shadow thrust and parry like a champion fencing match as can clearly be seen in the attached detail. The painting was made while Caravaggio was still an apprentice in order to show off his skill in painting emotions (the boy startled and hurt by the sudden bite). Caravaggio’s paintings were much discussed and criticized at the time and … so widely followed that he became the only artist in history after whom a painting style was named, caravagism. Luckily the Galerij canshow two exmples of this style from its own collection, a Rubens and a Van Honthorst.

The Caravaggio is on display from Friday October 11th to Sunday December 8th 2013.
Opening times Tuesday through Sunday from 12.00 ~ 17.00

Make sure you don’t miss it.