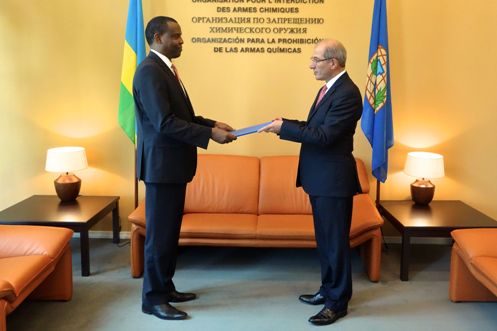 By: Willem Versteegh, Communication Expert at Embassy of the Republic of Rwanda.

The Organization for the Prohibition of Chemical Weapons (OPCW) is an intergovernmental Organizations located in The Hague. The Organization promotes and verifies the adherence to the Chemical Weapons Convention which prohibits of the use of chemical weapons and requires their destruction. The organization is not an agency of the United Nations but cooperates both on policy and practical issues. The headquarters were officially opened by Queen Beatrix of the Netherlands on 20 May 1998.

During their discussion Ambassador Jean Pierre KARABARANGA informed the Director General of the OPCW that the Republic of Rwanda does not possess chemical weapons and assure him the willingness of the Government of Rwanda to cooperate fully with the OPCW Secretariat in eradication of the chemical weapons worldwide. Ambassador KARABARANGA informed him that Rwanda has a national law dedicated specifically to the chemical weapons. He emphasizes that the Rwandan National Police and other relevant institutions has received proper trainings to deal with the use of chemicals weapons in case of need. KARABARANGA reiterate the need to work together to avoid that Chemical weapons gets in hands of terrorist groups.

On 30 April 2004, Rwanda becomes the 162nd State Party to the OPCW. At that time there were 40 African countries that were Member States in the said Organization. As of today 190 countries are members of the OPCW. Rwanda joined the OPCW together with Sao Tome and Principe, Cape Verde, Libya and Chad.

On 1st – 3rd November, 2011- The Organization for the Prohibition of Chemical Weapons (OPCW) Technical Secretariat carried out a Technical Assistance Visit (TAV) to Rwanda.

The Director General thanked the Rwandan Government for their tangible results in the promotion of the total elimination worldwide of chemical weapons.