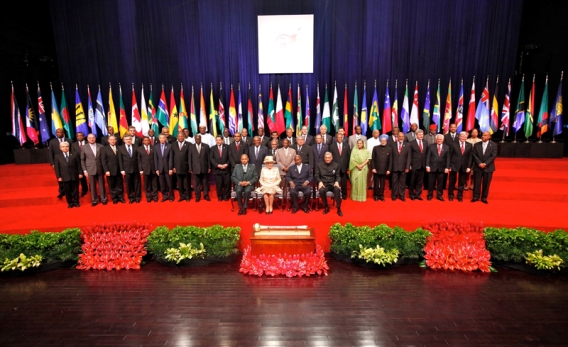 By Paramjit Sahai[*], former Ambassador of India; University of Malta.

Indian foreign policy, which earlier had enjoyed national consensus, is coming increasingly under pressure of domestic politics.  It is apparently so, given the fact that the Indian government is run by a coalition of parties; some are a part of the government, while others are giving support from outside. It is not India alone but other countries, with a coalition government that are facing a similar problem. Recently, the British government had to cancel its announced migration policy on bonds for student visas, as the Prime Minister Cameron did not get support from Nick Clegg, leader of its coalition partner – Liberal Party. Even countries with Presidential system, like USA, have to face the brunt of domestic politics.

Indian foreign policy was recently subjected to a grueling test of domestic politics, on the eve of the Commonwealth Heads of Government Meeting (CHOGM) 2013, which opened on November 15, 2013 at Colombo, Sri Lanka.  The initial pressure was from the two main regional parties, DMK and AIDMK; later all the regional parties embraced this agenda.  This led to the passing of a unanimous resolution at the Tamil Nadu Legislative Assembly imploring Prime Minister (PM) not to attend the CHOGM 2013, as a gesture of support to the Tamil sentiments in support of the minority community in Sri Lanka, which had been subjected to human rights violation.

Arguments for and against Prime Minister’s participation at CHOGM were advanced.  There was a running debate in the media, based on developments and information, provided by the interested parties on a daily basis. The two main contentious points were that CHOGM was a multilateral forum and the agenda was more than the Human Rights issue in Sri Lanka.  Would non-attendance set a wrong precedent?  The second was a tactical issue, whether engagement would be a better option or not, as participation could help in conveying a collective message from the Group and thereby enhancing its value and strength.  The media was not a reflection of Indian viewpoint only, howsoever, diverse it may be.  Sri Lankan strategic viewpoint and its official opinion were equally provided with prominent space in the print media.

Prime Minister was faced with a Hamletian dilemma, ‘To attend or not to attend’.  This dithering on the part of the government resulted in it being subjected to intense pressure.  The debate was further muddled when senior Cabinet Ministers from the government started openly voicing their concerns over Prime Minister’s attendance.  Information was also leaked that the Cabinet was itself divided over the issue. The Prime Minister’s Office (PMO), the Ministry of External Affairs and the National Security Advisor pushed for PM’s attendance, while the others, on account of regional connection were not in favour of participation.  It was a cache 22 situation, whether foreign policy interests should be allowed to prevail or regional interests, based on ethno-sub-nationalism be allowed to carry the day.  The verbal duel was carried against the backdrop of impending state elections in November-December and General Election in early 2014.  The Congress needs the support of regional parties, as it is not likely to get absolute majority.

The Tamil political leadership further tightened the screws on the central government.  The State Legislative Assembly passed another resolution, adopting a stringent and tougher posture, escalating the stakes by asking the Government to boycott the CHOGM 2013.  It was a tough call to answer.  Spokesperson of the Ministry of External Affairs was made to spell out the criteria that would be adopted to take a decision, which would include national interest, international obligations and foreign policy priorities.  Various options were explored and one important one included PM attending the Summit, while simultaneously paying a visit to Jaffna, as a gesture of support to the newly elected regional government in the North Region, led by Tamilians.  At the end of the day, die was cast against PM’s attendance as ‘domestic politics’ triumphed over the foreign policy interests, as reportedly decided by the Congress leadership under Sonia Gandhi.

The Government, however, did not go full hog with Tamil aspirations and India was represented at CHOGM at the level of External Affairs Minister Salman Khurshid.  This did not fully satisfy Tamil leadership, which continued to voice its concerns. Sri Lankan Government had to put a brave face, in not openly criticizing India’s non-attendance at PM’s level.  In the past also, India had missed attendance at CHOGM at that level. In his formal communication to President Rajapaksa, Prime Minister reportedly did not spell out reasons for his non-attendance. This left each party to make out their own prognosis for public consumption, although the reasons were apparent.  Sri Lankans kept their reaction at low key, even though they would not have been happy at these developments.

In India, non-attendance of CHOGM by Prime Minister was viewed in negative light, as forsaking its national strategic interests at the altar of domestic politics. Practically, all the editorials adversely commented upon this development.  It was seen as ‘Surrender on CHOGM’ (The Hindu), as attendance including a visit to Jaffna would have been ‘a powerful reaffirmation of New Delhi’s stakes and interests in the region’.  Another viewed it as ‘a signal of foreign policy paralysis’ and India ‘risking all its strategic capital in Colombo’ (The Times of India). Still another editorial saw in this as ‘Delhi’s abdication’, caving in ‘to narrow considerations’, as India ‘diminished itself’ and undermined itself in ‘this important multilateral forum’ (The Indian Express).  It is, however, debatable as to how important is Commonwealth at the present juncture.

Ironically speaking, what was an option planned by India was executed by the British Prime Minister Cameron, as it is likely that he picked up this idea in India.  Otherwise also, ideas freely travel in this age of globalisation. Cameron thus became the first foreign dignitary to set ‘foot in Jaffna after a gap of over five decades.  He stated, ‘I want to shine a light on chilling events there first hand’.  His message struck a positive chord with the Tamilians, who became beholden to his empathy towards them. He also did not shy away from sending a strong message on human rights issue, prescribing the March 2014 deadline for the setting up of an independent investigation agency. This obviously was rejected out of hand by President Rajapaksa.

While Cameron scored on both the above fronts, it was a case of lost opportunity for Prime Minister Manmohan Singh.  It was, therefore, not surprising to see Salman Khurshid publicly lamenting this missed opportunity.  This would have been an excellent occasion to flag Indian presence, where it is involved in infrastructural development projects, including construction of 50,000 low cost houses in the Northern Region.  An editorial in the Indian press noted that Cameron ‘has stolen the spotlight from the Commonwealth by visiting Jaffna’ (The Tribune).  Another editorial noted that PM’s absence at the Summit had ‘brought no political or diplomatic advantage’ (The Hindu).

History will tell us, whether India made the right or wrong choice.  Withdrawal from international scene and not taking the matters upfront has only weakened India’s profile in the international arena.  How can India be expected to play a major role, as a world leader, which it wants to emerge, if it shies away in making a mark in its own backyard and the region?  It is here that India has to shine first. India’s strategic interests are likely to suffer and others are likely to fish in the troubled waters.  It also went against the grain of India’s foreign policy as recently espoused by Prime Minister Manmohan Singh at the Heads of Missions’ Conference on November 4, where he stressed that sub-continent’s shared destiny required greater regional cooperation and connectivity.

How can India connect with the world, if it allows its foreign policy to be shackled by its regional compulsions based on domestic politics?  It has to rise above these narrow interests as it reimages a strong India.  It has to use both, hard and soft power options, to emerge as a benign power in the region and take its responsibilities as a world leader.  Engagement is the only way out, as India has seen that disengagement with Pakistan was not a way out, as a search for a window for engagement continues.   India has to calibrate its foreign policy in such a way that it represents its national interests, while it takes on board regional concerns and perceptions. There cannot be two opinions that there has to be one Indian foreign policy, and not Punjab, Tamil Nadu or West Bengal foreign policy.