Cuba : Example of Resistance and Solidarity. 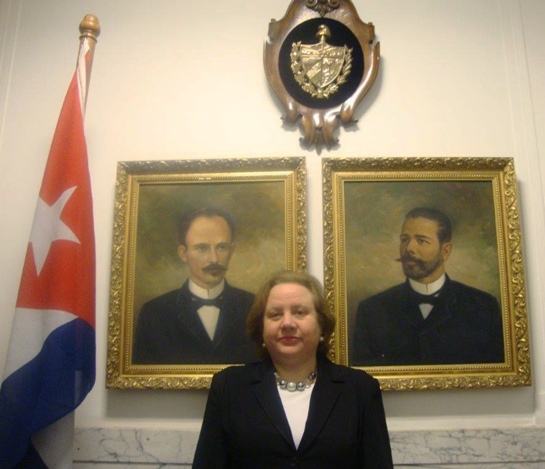 By Zelmys Maria Dominguez Cortina, Ambassador of Cuba to the Kingdom of the Netherlands.

Each January 1st marks the anniversary of the triumph of the Cuban Revolution – that in 1959, put end to one of the bloodiest dictatorships of Latin America. The will of the Cuban people of ruling their own destiny became the main source of conflict with the powerful neighbor of the North, the United States of America, which believes that Cuba should be forever their backyard, as part of the written destiny for the Biggest Island of the Antilles.

However, Cuba followed the ideas of the Cuban National hero Jose Marti, by creating a sovereign anti-discriminatory project of political, economic and social system, based in the respect of all the rights of any human being; developing the capacities and potential of the population in order to build a better society. Cuba also condemns all interventionist and discriminatory political manner in international relations, as well as the threat or the use of force, unilateral coercive measures, aggression and all forms of terrorism; including State terrorism. The Constitution of the Republic of Cuba condemns any type of discrimination for reasons of race, creed or opinion.

The Cuban Revolution resisted for more than 50 years the blockade of United States towards Cuba. Every year at the General Assembly of United Nations the overwhelming majority of the countries of the world votes in favor of the draft resolution presented by Cuba entitled “Necessity of Ending the Economic, Commercial, and Financial Embargo Imposed by the United States of America against Cuba.” Since its very conception, the blockade has been and it is a flagrant violation of International Law and is contrary to the principles and purposes of the United Nations Charter and constitutes a violation of the right to peace, development and security of a sovereign State.

Given its stated purpose and the complex political, legal and administrative structure on which it is based, the blockade qualifies as an act of genocide under the Geneva Convention on the Prevention and Punishment of the Crime of Genocide of 1948. The blockade has proven to be the main obstacle for Cuban economic and social development, the largest hindrance for expanding Cuba’s commercial ties with the rest of the world, and has become a serious restraint for the international cooperation that the country both provides and receives.

Nevertheless, the Cuban people not only showed during all their years their capacity of developing a successful system, but also supported other countries of the world, with doctors, professors, and technicians in many fields. The well known solidarity of the Cuban people to others all over the world is a great example of the victory of the Cuban project and the support of the people to the historical leaders of our Revolution.

Cuba is not isolated. It has diplomatic relations with 190 countries, orders and institutions (184 UN member and 6 do not). It has 148 locations abroad in 120 countries, including 119 embassies, 1 section of interests, 21 consulates general, 3 offices, diplomatic representatives and 3 representations to international organizations. On 5 January, 2014 the Minister of Foreign Affairs of Netherlands Frans Timmermans will visit Cuba, as a new important step towards the improvement of the bilateral relations, which also follows the positive trend of EU towards Cuba.

It is a matter of joy each anniversary of victories as a new step for a better world, because in Cuba, we believe that a better world is possible and we try to build it every day.