Exotic Invaders at the Hofvijver 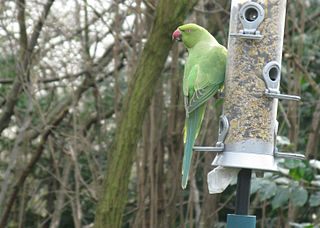 One of the side benefits of travel is a heightened acuity to one’s own environment after having returned from a trip, whether it be it near or far.  For those of us who find ourselves living away from our country of birth for many years, “adaption” eventually gives way to assimilation.  In my case, the city of assimilation, and residence, is The Hague.   Soon, we may conclude that “home”, wherever it may have been, is no longer “home”, as we have become mere sojourners in a once familiar, but now increasingly foreign, land. Simultaneously, we have successfully adapted to our new environment.

While walking my dog along the Havenkade by Westbroek Park, in recent years, I’ve often noticed a streak of exotic lime green flashing past from above accompanied by a din of excited squawking.  Local birdlovers, like me, immediately recognize the distinctive sounds and colors of the Rose-ringed Parakeet (Psittacula krameri) or  Halsbandparkiet, as it is known in Dutch.

Were it not for a delightful visit to the Malaysian city of Melacca (Melaka) which is well known for its historic Dutch colonial city center and, since 2008, has been listed as an UNESCO world heritage site; I would never had thought to consider that the Rose-ringed Parakeet has also settled in The Hague as an alien. This tropical bird, to use the formal Dutch term, is an “Exoot” or exotic and is native to northeast Africa and southeast Asia.

Melacca’s historic 17th C. Stadthuys on the Crimson Square, is certainly worth visiting, but a riverside  “slaapboom” or sleeping tree, is what really captivated my attention during my visit to the city.  Thousands of local parrots can be observed descending nightly upon an “Avatar” like tree at dusk for a communal ritual of sleeping safely together amongst the branches of a stately old sleeping tree in the old city center.  Some months later, after having returned home to Scheveningen, I mistook the first pair of  Rose-ringed Parakeets that I saw darting amongst the trees at the park, for successful caged escapees, only to later learn that there several “colonies” have taken up residence in Dutch urban areas and one of the largest colonies, numbering some 5,000 birds, is to be found in The Hague.  Naturally, I was eager to learn where their “sleeping tree” was located and was amused to discover that they have taken up residence at the Binnenhof or, to be more precise, on the “island” in the Hofvijver—in front of  the prime minister’s “little tower.”

These “feathered foreign invaders” may not be “angry birds”, but in the eyes of a few concerned caretakers of  “monumental trees”, naturalists and government officials; their presence in the community is increasingly unappreciated.  In an article written last February 13th, Boudewijn Revis (city caretaker), announced that 6 of the 25 chestnut trees along the Hofvijver have been so damaged by the birds that they must be cut down and removed.  Further, the independent Advice Council on Monumental Trees (Adviesraad Monumentale Bomen) has labeled the damaged trees a “safety risk.”

It would seem that the Rose-ringed Parakeets days at the Hofvijver may be numbered.  If, and when, their trees are removed, they will be forced to migrate elsewhere.  According to SOVON, the Dutch Center for Field Orinthology, an organization which actively monitors and counts wild bird populations for in developing nature management policies, management plans and spatial planning, some 10,000 Rose-ringed parakeets residing in major urban areas around the Randstad.  In addition to The Hague, they have been observed in Amsterdam, Haarlem, Leiden and Leiderdorp and they  have a known range of up to 30 km from their “sleeping tree” so the hope may be that by removing the trees; the undesired winged “kraakers” will be forced move on so that peace and tranquility will return to the little island in the Hofvijver.