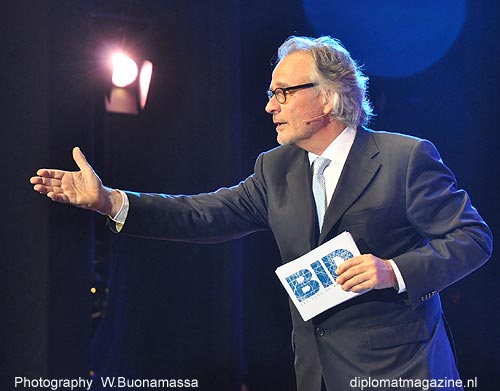 For photo album of this magnificent event click here: http://www.flickr.com/photos/98057281@N02/sets/

• Links between the government, the private sector, education and the public stronger than ever

The Hague, 22 January 2014 – The seventh edition of ‘Big Improvement Day’ was held yesterday

at the RAI in Amsterdam. In addition to Dutch business leaders, seven Ministries took part in BID

2014. Under the leadership of Mark Frequin, Director General of Housing and Construction at the

Ministry of the Interior and Kingdom Relations, many innovative initiatives and special issues were

presented to the private sector, showing the government’s enterprising side. Leading entrepreneur John

for a number of substantial corrections to our current political system.

John Fentener van Vlissingen: ‘How do we make the Netherlands workable again?’

1. Set the election threshold at 5% of the votes.

2. Admit new political parties with 1 seat if they win the required number of votes but do not

3. After 4 years in Parliament, a new party also has to attain the election threshold of a minimum

4. Reduce the number of election districts to 6. This will increase the local involvement of

5. MPs must live in the districts in which they are elected.

6. The Senate should lose the right to reject a Bill.

7. The Senate should be given the right to alter a Bill.

8. The Lower House will then adopt or reject the Bill in a second round.