Bringing the Heritage of Past into the Future 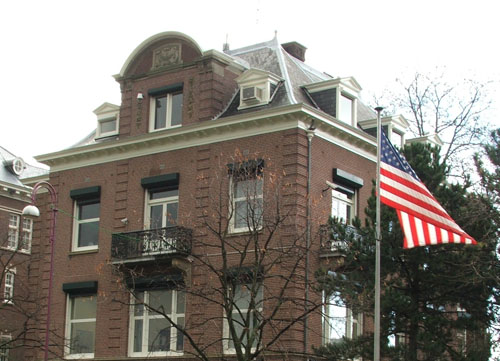 By Randy Berry, Consul General of the United States of America in Amsterdam. When I took up my post as Consul General for the United States in Amsterdam, I was keenly aware that I’d inherited a rich and complicated legacy in the form of the building in which the current Consulate General is housed.  As a former history teacher, I have been enthralled with proper study and researching the past; as a diplomat, I’m cognizant of the need not only to preserve cultural heritage, but also to project a hopeful and inclusive image for the future.

The current location of the Consulate General began its existence one century ago as a home in the prestigious Museumplein region of Amsterdam.  Mr.Willem Frederick van Heukelom, a prosperous trader in the Dutch East Indies, purchased the lot at Museumplein 19 in 1912 and hired architects T.G. Schill and D.H. Haverkamp to design a villa for his family.  Van Heukelom also hired Johan Adam Pool of the highly regarded furniture workshop Onderden St. Maarten to design the interior of the house as a fitting showcase for his collection of Chinese porcelain, the most valuable in the Netherlands at that time.

The Van Heukelom family owned Museumplein 19 until January 1938, when Willem Frederick’s widow, Catharina Digna Peereboom Voller, sold it to the German government to be used as its consulate.  Germany declared war on the Netherlands in May 1940, and a year later, Dr. Hans Böhmker, the Deputy Reichskommissar for Occupied Holland, established his office at Museumplein 19.  The occupation transformed the district into Nazi headquarters, as the German army and police moved into buildings adjacent to Museumplein 19.  The green space of the museum square became the location, first, of rallies in support of the Nazi cause, and, later, of barricades, barbed wire, and bunkers as Allied bombers flew overhead.

After World War II ended, the transition of Museumplein 19 back to peacetime functions took place rapidly.  Less than a month after Victory in Europe Day on May 8, 1945, U.S. Consul General Albert M. Doyle visited Amsterdam in search of a building in which to reopen the Consulate General of the United States of America.  By the beginning of August, Doyle hadsettled on Museumplein 19 as the location, subject to permission from the Dutch government, which was subsequently granted.  Doyle and his colleagues offered the first consular services from the building on September 6, 1945, and the United States of America purchased the building from the Dutch government in March 1948.  The Consulate General has called Museumplein 19 its home ever since.

The villa’s historic and architectural significance wassolidifiedwhen it was designated by the Netherlands government as a Rijksmonumentin 1996.  As stewards of a property vital to the urban design history of the city, the State Department’s Office of Overseas Buildings and its newly created Cultural Preservation Department teamed up with the Consulate Generaland

several students of the University of Amsterdamto createa detailed historic structures report.  The aim is to document the development, significant features, and condition of the stately villa atMuseumplein 19.  It will also determine a period of significance indicating in which era the building had its most noteworthyperiod of history.The report is expected to be released in the coming months and this“period of significance”will serve as a blue print and guide on how to best conserveour “home”in Amsterdam.

In an effort to be thorough, we visited a number of institutions such as the Stadsarchief and Netherlands Institute for War, Holocaust and Genocide Studies in the Netherlands who helped us assemble accurate information needed to create the Historical Structures report.  In just a few weeks, February 2014to be exact, we will publish the final report on our websitewhich will includesubstantial new information regarding the history and use of our building gleaned from Amsterdam’s various historical archives.  The partnership and supportwe’ve received from Amsterdam-area institutions and individuals has been tremendous, and I’m particularly happy that our research project was undertaken with key student support.

The historical information unearthed will form the backdrop, not onlyfor ongoing restoration work in the villa, but also futureprograms, engagement, and discussions centering on the essential values of diversity, inclusivity, and multiculturalism –key elements, indeed, that both America and the Netherlands share as part of our national identities.We anticipate that 2014 and 2015 will see these programs take shape, and I look forward to sharing that with you in the future.