On Wednesday participants will sign a more than 80-point declaration covering issues; support Argentina’s claims over the Falklands; condemn US blockade of Cuba, declare the area a region of peace and free of colonies, and probably call for Puerto Rico to join Celac. 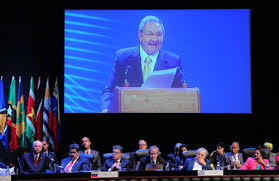 Dominican Republic (DR) President, Danilo  Medina, delivered an energetic speech before the chiefs of State and heads of governments. He  unequivocally made his country’s position  clear on the protection of human rights. Medina  was alluding to  Haitians residing in his country. President Medina reiterated that Dominicans have been the people most in solidarity with Haiti, and he cited that there are nearly a million Haitians living in the DR. However, the Dominican Republic will not accept any foreign infringement in her  internal immigration affairs, said President Medina during his address in la Havana.