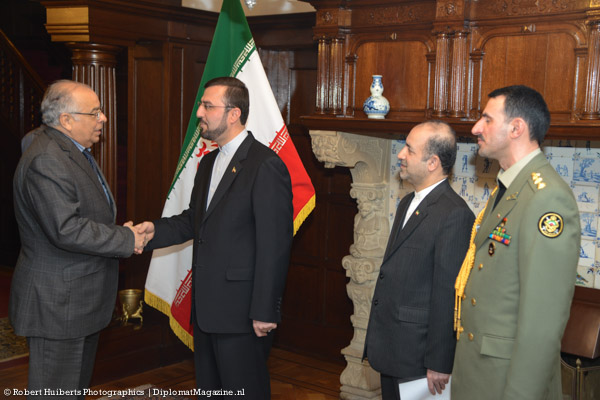 Statement by H.E Mr. Kazem Gharib Abadi, Ambassador of the Islamic Republic of Iran to the Kingdom of the Netherlands.

On the Occasion of 35th Anniversary of the Islamic Revolution in Iran The Hague -10 February 2014.

In the Name of God.

In the period of the bipolar system, the 1979  Islamic revolution of Iran under the leadership of late Imam Khomeini has brought significant political, social, cultural and economic changes in my country and  the Islamic model of governance (religious democracy) was unanimously voted for and approved by more than 98.2 percent of our nation.

Independence, rule of law, freedom, dialogue, pluralism and justice are the most important principles and objectives of the Islamic Republic In domestic politics. Iran is a country which is relied on its nation and its participation in the management of the country.

Iran, as an ancient country, is well known for its 7000 years of civilization, virtual arts, history, literature, handicrafts, diverse cuisine, architecture, music, cultural and ethnic diversity, deserts, mountains, international registered monuments like Persepolis and Bam and so on.

Although Iran has the second proven natural gas reserves and the third proven oil reserves in the world, but it should be acknowledged that Iran is more than an energy superpower. Oil, gas, diverse mines and natural resources have made the country as a land of opportunities and huge capabilities.

During the past 35 years, Iran has successfully made tremendous achievements in various fields such as science, medicine, nanotechnology, stem cells, aerospace, satellites, defense, education, health, industry, mining, agriculture and peaceful use of nuclear energy.

As you are informed, Iranians at home and abroad participated in the eleventh presidential election on 14 June 2013 and recorded an epic turnout in determining their own destiny. Dr. Rohani was elected as the new president of the Islamic Republic of Iran. Massive participation of %72.2 of the Iranian nation in the election once again indicated the strong links between the state and the nation. The result of the election, which was unexpected for some outside analysts and politicians has proved that the right of the people to select their own choices is always respected and guaranteed by the country.

By participating in the election the peace-loving people of Iran expressed their interest in developing friendship, cooperation and dialogue with civilized nations and states across the world. The hope that respect to shared human values and interests in view of a high spirit of cooperation would lead to the formation of a world without threats and intimidation and full of welfare, and spiritual and material perfection. Iran’s new president from the very beginning declared that will follow a “path of wisdom, moderation and hope, justice and enhancing mutual trust between Iran and other countries on the basis of mutual respect.” The real message of the president to the international community is that we have common interests, joint goals to promote peace, security and tranquility in the region and the world.

Recently we witnessed a significant diplomatic development between Iran and P5+1. Seven countries agreed on a provisional plan of action regarding the nuclear issue on 24th November 2013 in Geneva. The Geneva deal, which was made through diplomacy and negotiation, is a new sign of an emerging mutual confidence building and respect.  The interim deal is an “important achievement” but a “first significant step” toward resolving an “unnecessary crisis” based on a win-win approach, stressing that the two sides need to work together based on “equal footing, mutual respect and common benefits.”

The Islamic Republic of Iran as a pivotal player in the Middle East has great interest in peace, tranquillity, progress and security and wishes lasting, sustainable and prosperous future for all peace-loving nations. We believe that constructive and effective engagement among countries would pave the way for better and common understanding and achievements. Iranians are a peace-loving nation, and their rich culture and history is deeply rooted in wisdom, reason and interact with other nations.

Since my mission as the ambassador of the Islamic Republic of Iran to the Kingdom of the Netherlands will come to an end this month, I would also like to talk very briefly about our relations with the Netherlands. Relations between two countries date back to 400 years ago and have continued until today, through which the two nations and countries have developed a deeper understanding and  promoted their national interests. Taking into account this principle that “the role of the diplomats is the construction and adjustment of the relations rather than its destruction”, my colleagues and I tried to take any opportunity to promote the relations between the two countries during the past 50 months. I would like to acknowledge that the two countries have common interests in several bilateral, regional and international areas which necessitates their cooperation and interaction.

Ministers for foreign affairs of two countries have always been in touch during past four years. The President of the Islamic Republic of Iran and the Prime Minister of the Kingdom of the Netherlands have also met each other in Davos recently and negotiated about a variety of issues. Many cultural events take place, annually among the two countries. More than 5000 Dutch tourists pay visits to Iran, which as a result they become also friends of Iran when they come back to their country. More than thirty six thousand of Iranians live here in the Netherlands and while they are representing Iranian culture which we are proud of them, are contributing to the development of this country. The Netherlands is our third commercial partner in the Europe and the volume of business is more than 1.5 billion euros annually, which I believe there are rooms to be increased to 5 billion euros. To discuss further opportunities to promote the relations and better understanding, two Dutch parliamentarian and trade delegations will pay a visit to Iran soon.

In conclusion, I wish best of luck for all of you and please accept my appreciation for all contacts, cooperation and interaction which existed amongst us.

All human beings are born free and equal in dignity and rights. They are endowed with reason and conscience and should act toward one another in a spirit of mercy and brotherhood.

Thank you very much.