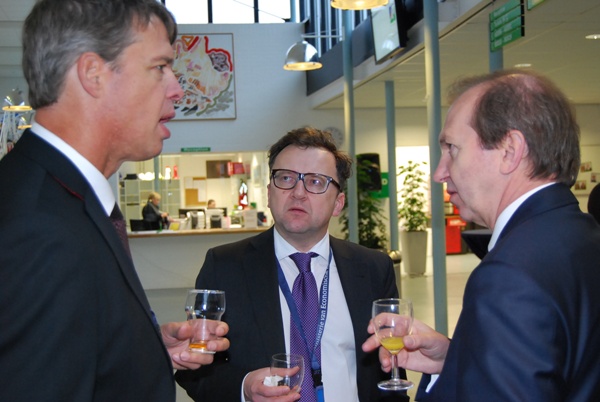 On the occasion of the Global Research Alliance on Agricultural Greenhouse gases (GRA) and on behalf of the Ministry of Economic Affairs a diplomatic event took place at Tuesday 11th of February 2014. More than 30 Ambassadors of so called non member countries gathered in the morning at the Ministry of Economic Affairs at Bezuidenhoutseweg 73 and they were welcomed by Roald Laperre, Deputy Director-General for Agro which opening was followed by a speech on the role of the GRA in meeting global challenges by Matthew Hooper, Ministry of Primary Industries, Government of New Zealand.

In the afternoon, the Deputy Director-General of the Ministry of Economic Affairs, Ambassadors, authorities, alliance delegates and distinguished guests visited the Wageningen University and Research Centre which is situated in the eastern part of The Netherlands and which University is supervised by the Ministry of Economic Affairs. After an opening speech by dr.ir. Martin Scholten, general director Animal Science Group of Wageningen University and co-chair of the Livestock Research Group both the so-called Unifarm as well as the respiration chambers at CARUS programme were visited.

In the end of this interesting programme a reception was offered by the University of Wageningen.

All Ambassodors enjoyed this very interesting programme and they will certainly keep in contact with the University of Wageningen in refer to the Global Research on Agricultural Greenhouse Gases!