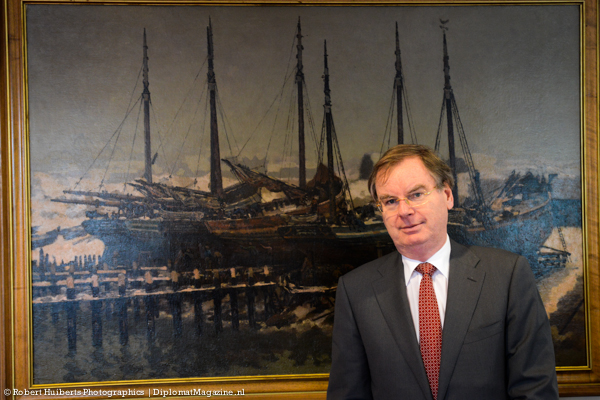 Mr. Bernard Wientjes is currently fulfilling his third term as President of the Confederation of Netherlands Industry and Employers. His vast experience as former businessman and as President of this Confederation enables him to answer  a few questions regarding the Dutch economy. He welcomes  us in his spacious office overlooking central The Hague and takes his first question:

What can the Dutch government do to improve Dutch export?

“Well first of all, the Dutch economy is dependent on exports, which added value  totals EUR  180 billion  annually, so it should be a priority to support the export as much as possible. We can do this through economic diplomacy, using the Embassies and Consulates, as they are our foreign trade representatives. Secondly, the Government is responsible for tax-treaties, so they must ensure that there are no tax-barriers for other countries to invest here. Thirdly there is the TTIP, the Transatlantic Trade and Investment Partnership.  The EU is currently negotiating Free Trade agreements with the US, Japan and  ASEAN. We expect the Government to fully  support these negotiations. Protectionism is a big danger for trade. We are very happy with our Minister of Foreign Trade, Ms. Lilian Ploumen.”

Are you worried about unemployment in The Netherlands  and if so, what should be done about it?

“ On the long term I am not pessimistic, but at the moment we are still at the end of the recession. Our GNP did not grow in 5 years. Our national income in 2013 was the same as in 2007. No growth equals unemployment, so we absolutely need growth. The growth forecast for 2014 is 0.5%. That is too low. We need at least 1.5% growth,  but world-wide the signs of economic growth  are encouraging, so I am a bit more optimistic. Long term, because of demographics,  there will be a shortness of labor.  I see it as a so-called ‘war on talent.’ We need highly skilled people.  Companies such as  ASML and Philips already have people with 20-30 different nationalities working for  them. We need everybody in The Netherlands. At the moment 22 out 100 Dutch students study technical sciences, in Germany that number is 40 out of 100 students. In Germany there is a very strong industry, so that makes sense. The reason that this is not the case in The Netherlands is because some time ago The Netherlands was likely to  become  a country of ‘service-industries,’ so the students based their choice of study on  service-related courses and social sciences.  Today the situation has reversed  and  the industries are returning to The Netherlands.  Technically trained people are in high demand.”

The Netherlands is proud of its ‘Poldermodel.’ Does it still work?

“That is a good question. Many think that the Poldermodel is dead, but in my opinion it is very much alive. As a matter of fact the Government survived because of the Poldermodel. Initially the Coalition agreement was not accepted and it was re-written because of the Poldermodel. The increase in pension-age, the reform of the labor laws all these changes were made possible through the Poldermodel. We know we have to make compromises. The Poldermodel will always be with us.  Compromise is in the blood of the Dutch people. On a totally different note I would like to say that I am very happy with the decision not to close the Embassies and Consulates in Munich, Milano, Antwerp and Chicago. At the moment we are fighting to prevent the closing of the consulate  in Osaka. The Netherlands is very much dependent on foreign trade  and the Embassies are our most important Trade representatives.Therefore they should remain open.”