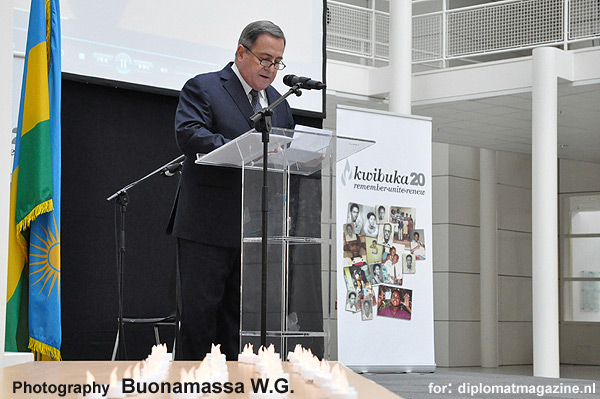 On the occasion of the 20th Commemoration of the Genocide against the Tutsi His Excellency Mr. Jean Pierre Karabaranga, Ambassador of the Republic of Rwanda, held the Official Commemoration in the Atrium of The Hague City Hall. Ambassador Karabaranga spoke moving words, looking back on the shocking atrocities that took place exactly 20 years ago. “Kwibuka,” he said several times, which means “remember” in his own language. The audience also heard the chilling testimony of a survivor, which sent shivers through all present. Dutch Minister Ploumen of Foreign Trade and Development Cooperation also held a speech, not only looking back on the horrors,  but  praising  Rwanda’s  achievements since the 1994 Genocide, during which 1 million Tutsi were killed.  Kwibuka, indeed, let us all remember. Rwandans and the International Community alike. Main picture, H.E. Ambassador Carlos Arguello Gomez, Dean of the Diplomatic corps.