National Law University, Delhi, won the final round of the ICC Trial Competition 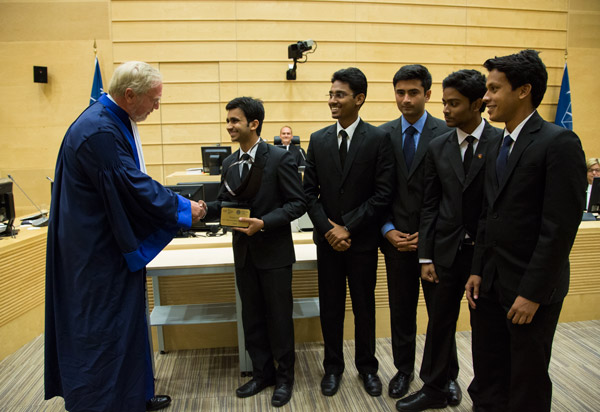 This year, 49 teams comprising a total of 290 participants from 35 countries worldwide participated in this year’s English-language simulation exercise on the applicable law and jurisprudence of the ICC. Before a bench composed of ICC Judge Howard Morrison (presiding), Special Assistant to the ICC President Philipp Ambach, and ICC Legal Officer Mary-Anne Power, the teams competed on a fictitious case, presenting oral arguments during an appeals hearing in the roles of Prosecution, Defence and Legal Representatives of a Government.

After a break for deliberations, ICC Judge Morrison announced the bench’s decision and an awards ceremony was held for all participants. The finalists’ peers attended the event in the Court’s public galleries and the event was web streamed live on the Court’s official website.

The ICC Trial Competition is organised by the Grotius Centre for International Legal Studies of Leiden University, The Hague Campus, with the institutional support of the ICC. Also cooperating on the project are the Federal Department of Foreign Affairs (FDFA) of Switzerland, the Planethood Foundation, the Ministries of Foreign Affairs of Luxembourg and The Netherlands, the Municipality of The Hague, the Ministry of Security and Justice of the Netherlands, The Hague Institute for Global Justice, the Embassy of Ireland, the Lutfia Rabbani Foundation, and the International Committee of the Red Cross.

In the context of its Academic Programme, the ICC supports the organisation of ICC Trial Competitions in Chinese, English, Russian, and Spanish, with a view to also support Arabic and French versions in the future. These initiatives play a critical role in galvanising interest in the Court’s work with academic communities as well as in enhancing promotion and respect for international criminal law.

View photographs of the event here.