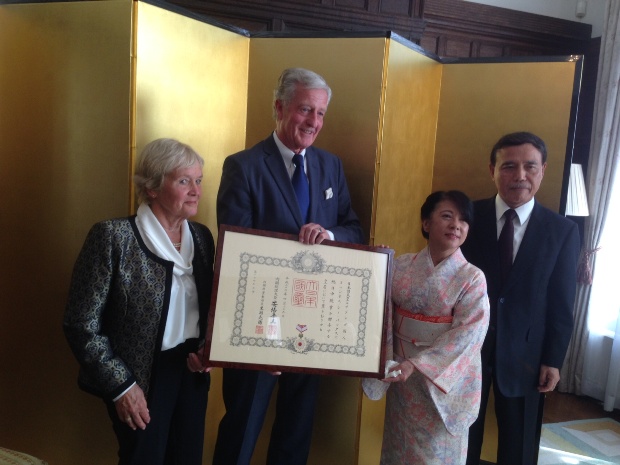 His Excellency Mr. Masaru Tsuji, Ambasador of Japan, hosted a ceremony at his residence in honor of Mr. Hans Bax, former Chairman of the DUJAT, the Dutch-Japanese Trade Federation. Mr. Bax received the most prestigious ‘Order of the Rising Sun and Gold rays with Neck Ribbon’ for his exceptional contribution to the strengthening of the economic ties and promotion of mutual understanding between Japan and The Netherlands. In his speech Ambassador Tsuji also praised Mr. Bax for his initiatives in supporting Japan during times of great disaster, such as the earthquake, as well as for establishing the Foundation “The Netherlands helps Japan.”  Mr. Bax said  that – in his own  words –  he was honored, happy and privileged and added that he could not have done it all without the support of others. Mr. Bax also expressed his hope that  the Dutch export to Japan, which now amounts to  less than 2%, would be increased in the future.