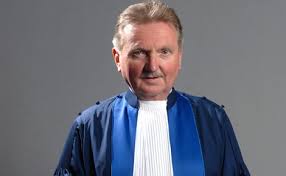 ICC  regret to announce that Judge Hans-Peter Kaul has resigned from the International Criminal Court (ICC) for health reasons. His resignation will take effect today  1 July 2014. Judge Kaul’s full term at the ICC would have ended on 11 March 2015.

The President of the ICC, Judge Sang-Hyun Song, expressed deep regret over Judge Kaul’s departure from the Court and the circumstances which necessitated his resignation. “I thank Judge Hans-Peter Kaul wholeheartedly for his dedicated service to the Court and his pioneering role in the ICC’s development, even before the Court was established”, President Song stated. “I worked closely with Judge Kaul, particularly when we were first sworn in together in 2003 and when he served with me in the Presidency as Second Vice-President from 2009 to 2012. I have enormous respect for his deeply humanist personality and his substantial contributions to international justice, which will continue to guide the Court in the future.”

A German national, Judge Kaul has served as an ICC Judge for 11 years. In the first elections of ICC judges in February 2003, he was elected by the States Parties to the Rome Statute for a three-year term and assumed his duty on 11 March 2003. He was re-elected in 2006 for a further term of nine years.

Judge Kaul was a member of the ICC’s Pre-Trial Division, serving as the Division’s President from 2004 to 2009, as well as from 8 April 2014 until his resignation. He contributed to important decisions in proceedings regarding situations in Uganda, the Democratic Republic of the Congo, Darfur (Sudan), the Central African Republic, Kenya, Libya and Côte d’Ivoire and related cases.

Judge Kaul also served for several years on various committees related to the Permanent Premises: he was chairman of the Inter-Organ Committee on the Permanent Premises (2003-2008), the senior representative of the Court in the Jury of the International Architectural Design Competition, and contributed to the work of the Oversight Committee of States Parties, playing an important pioneering role in the process which eventually led to the planning and construction of the ICC’s future permanent home.

From 1996 to 2003, Hans-Peter Kaul served as chief negotiator and head of the German delegation during the process leading to the establishment of the International Criminal Court.