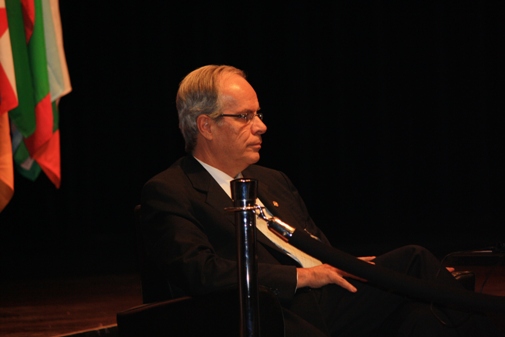 His Excellency, Jorge Lemcke, arrived in The Hague in September 2012. Like all new ambassadors, he subsequently presented his credentials to H.M. Queen Beatrix. Ambassador Lemcke Arevalo, deems it a pity that protocol does not allow photographs to be taken whilst credentials are presented to the king or queen as it would be an impressive occasion to capture. Ambassador Lemcke Arevalo said that it was a wonderful ceremony and a warm welcome to the Netherlands.

Ambassador Lemcke Arevalo speaks highly of his native Guatemala. He will focus on the promotion of Guatemala as the top priority during his tenure.

Guatemala in the export market

Current agricultural products exported from Guatemala include palm oil, sugar, coffee, fresh fruit and vegetables. The flower sector is thriving and Guatemala is known for its export of Phalaenopsis Orchids, a family of Orchids of more than 60 species and the most common kind of orchid on the flower market.

Tourism currently generates around 13% of the country’s GDP. Popular destinations in the country include: the magnificent Mayan ruins, where one of the five ancient world civilisations was established; the tranquil turquoise waters of the Caribbean and the thrilling adventure of the Pacific Ocean; historical Antigua, declared a World Heritage Site by UNESCO; the grandeur of Lake Atitlan, surrounded by three majestic volcanoes; and other incomparable destinations, including Guatemala’s rain-forest.

Guatemala and other key economic sectors

Beyond export and tourism, Guatemala’s hydro power plants provide 30% of the nation’s electricity with a potential of 20 times more output. The government is striving to increase this to 70% in the future. Sugar cane residue used for bio-mass also makes a moderate energy contribution. The clothing industry is also flourishing, with the US being a major customer. The textile cluster of Guatemala hosts a well-attended annual trade show, which is well regarded in the region, known as the Apparel Sourcing Show. The world famous Zacapa Rum, a digestive, is a number one export product. It is currently exported via a European distributor.

According to the National Statistics Institute of Guatemala the country’s current unemployment rate is at 3.2%. However, this statistic does not take informal employment into account.

Due to the country’s sophisticated communications network, several international call centers have branches in Guatemala, providing key employment across the nation. Health and wellness tourism is another important economical segment in the services sector, attracting many visitors to the country. However, the development of existing infrastructure is needed to provide the transportation sector with a further boost.

The high level of cooperation and solidarity in the Central American region is notable. There is a healthy level of inter dependence of which the respective sovereign states are very much aware and are acting to improve. The Tegucigalpa Protocol of 13 December 1991 agreed the need to jointly address regional challenges. The governments of Guatemala, Costa Rica, El Salvador, Honduras, Nicargua and Panama, signed the Protocol Sistema de la Integración Centroamericana (Central American Integration System, SICA) in 1991. This protocol aims to consolidate peace, liberty, democracy and development in the region, the fundamental objectives of SICA. The Dominican Republic and Belize have more recently gained access to SICA. Around 30% of the Central American population lives in Guatemala.

There is currently a border, island and continental waters dispute between Guatemala and Belize.  However, a referendum is set to be held in both countries in the very near future, after which it will be decided whether to take the matter to the International Court of Justice in The Hague. The Organisation of American States (OAS) will facilitate the process.

Nature and natural resources of Guatemala

Guatemala has around 30 dormant volcanoes and 3 active ones. It is a real spectacle to observe the rumbling volcanoes from the capital, Guatemala City. Guatemala has an ideal climate with lush and fertile land and can be visited during any time of the year during the country’s two seasons: from May to October it is the rainy season, and from November to April the dry season.

The wealth of natural resources in Guatemala includes crude oil, gold, nickel, silver and copper and important reserves of non-metallic minerals such as limestone, schist and clay. Important investments in this sector are concentrating on extracting oil and precious metals and producing portland cement, lime and other important construction materials.

Guatemalan dishes include the famous Guatemalan tamales, black bean stews, and high cuisine mainly using turkey, pork, and chicken. Unfortunately there are currently no Guatemalan restaurants in the Netherlands.

More about the Ambassador

His Excellency Ambassador Jorge Alfredo Lemcke Arévalo, is a chemical engineer by profession. He also holds a Masters in Business Administration, previously having worked in the construction sector before joining the diplomatic service. Jorge Alfredo Lemcke Arévalo loves sports and is a former basketball and volleyball player, having also tried his hand at tennis as well as recently taking up cycling and walking. As for arts, he enjoys playing the organ and keyboard.

Ambassador Jorge Alfredo Lemcke Arévalo hopes that his legacy will be to see an eventual court case at the ICJ achieving a solution to the long border dispute between Guatemala and Belize. As well as taking his beloved Guatemala to higher heights in the world.

Guatemala, the land of eternal spring and cradle of one of the five ancient civilizations, welcomes investors, the enjoyment of her natural resources, agriculture and tourism, as well as visitors to the country’s amazing Mayan heritage, ruins and temples.