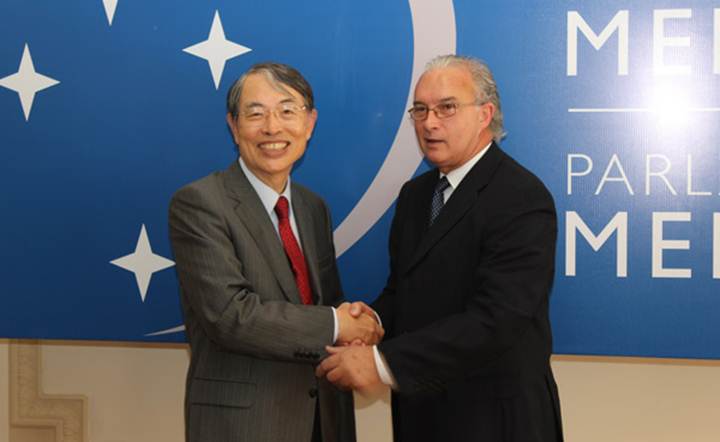 ICC concludes Framework Cooperation Arrangement with the Parliament of MERCOSUR

On 4 August 2014, Hon. Rubén Martínez Huelmo, President of PARLASUR (Parliament of the MERCOSUR, Common Market of the South) and the President of the International Criminal Court (ICC), Judge Sang-Hyun Song, met at MERCOSUR premises in Montevideo (Uruguay) to sign an Exchange of Letters for the establishment of a Framework Cooperation Arrangement between the ICC and PARLASUR. Recalling the connections between peace, justice and sustainable development, the two organisations agreed to develop their mutual cooperation on matters of common interest.

Addressing the guests of the signing ceremony convened on this occasion, President Song stated that “each and every one of the 12 MERCOSUR Member States is a State Party to the Rome Statute, and each one of them has helped pave the way for a more effective international justice system. The shared aspiration of the ICC and MERCOSUR to unite the international community through cooperation and mutual understanding is the link that allows both organizations to jointly set the stepping stones for what today is a milestone agreement, and for what tomorrow can yield new avenues of combined efforts for the greater good.”

In his remarks at the signing ceremony, President of PARLASUR Rubén Martínez Huelmo indicated MERCOSUR’s commitment to this institution “since the Parliament is in tune with the full force of the Rome Statute (…), which has been ratified by all the MERCOSUR Member States.” He added that PARLASUR has decided to sign this arrangement for the purpose of “the promotion and dissemination of international criminal law, the promotion and dissemination of the principles, values ​​and provisions of the Rome Statute and other related documents, and at the same time to provide public and political support for the mandate and activities of the International Criminal Court, which is implementing the Statute.” Likewise, “this agreement will enable the Parliament to gain prestige, as it is the only parliament of integration which has a Commission on Citizenship and Human Rights which reports annually on the status of rights and therefore is an element that participates to PARLASUR’s efforts in safeguarding the great values ​​of the Rome Statute.”

Speaking at the event, Uruguayan Parliamentarian Felipe Michelini said that “it is a satisfaction that we advance in our work for the universality of the Rome Statute, so that all countries of the international community accede to the Statute (…) a task, which has allowed us to move forward, and to identify common objectives in the Rome Statute for the promotion and defense of human dignity.”

All countries in South America – including the 5 full members of MERCOSUR (Argentina, Brazil, Paraguay, Uruguay and Venezuela) and the 7 associate members (Bolivia, Chile, Colombia, Ecuador, Guyana, Peru and Suriname) – have joined the Rome Statute – the ICC’s founding treaty. The ICC-PARLASUR Cooperation Arrangement, which is concluded in accordance with Article 87(6) of the Rome Statute, will help intensify the involvement of MERCOSUR and its Member States in the international criminal justice system.

The Arrangement foresees that the ICC and PARLASUR will cooperate in matters of common interest such as: public and political support; promotion and dissemination of international criminal law, including the principles, values and provisions of the Rome Statute of the ICC; the promotion of legislation implementing the Rome Statute at national level as well as voluntary cooperation agreements of MERCOSUR Member States with the ICC; exchange of information and documents; and reciprocal invitations to conferences and meetings.