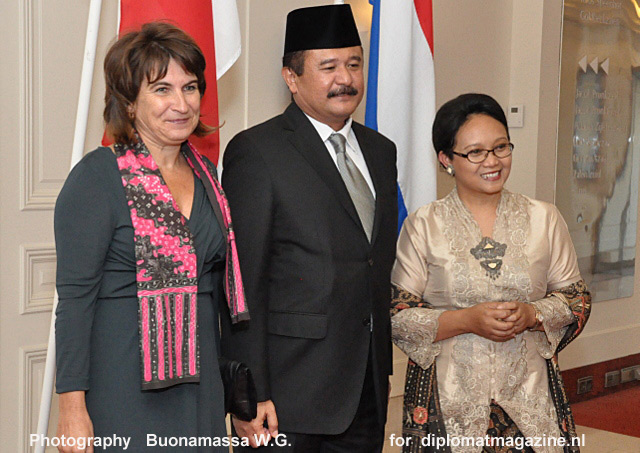 The Embassy of the Republic of Indonesia to the Kingdom of the Netherlands in collaboration with the Bank Negara Indonesia (BNI 46) has held a Diplomatic Reception at Kurhaus Hotel, The Hague, on Wednesday, 20 August 2014, to commemorate the 69th Anniversary of the Independence of Indonesia. The Diplomatic Reception under the  theme of “The Pride of the Indonesian Heritage”, is exposing “Fashion Diplomacy” to promote high-end fashion products and crafts, cultures, and culinary. 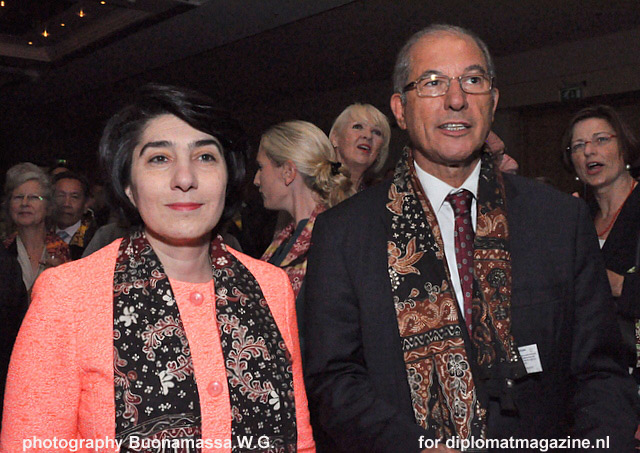 As many as 500 distinguished guests attended the event including the President of the Senate (Eerste Kamer), the President of the Supreme Court of the Netherlands (Hoogeraad), high Dutch officials, foreign ambassadors and diplomatic corps, politicians, military and police officials, Dutch private sectors, Dutch youth and others. The Guest of Honour of the diplomatic reception was H.E. Mrs. Lilianne Ploumen, Dutch Minister for Foreign Trade and Development Cooperation. 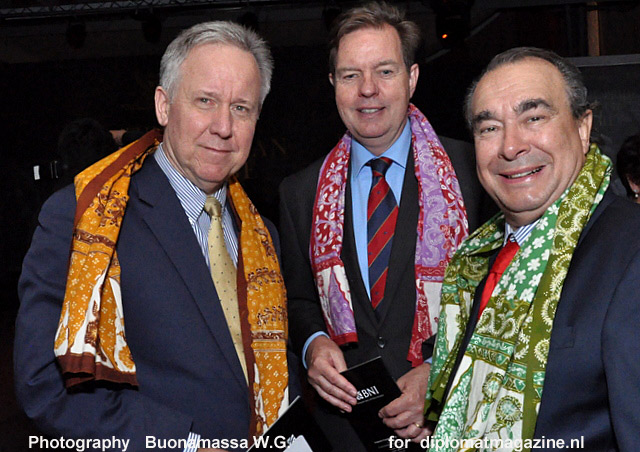 Ambassador of the Republic of Indonesia to the Kingdom of the Netherlands, H.E. Retno L.P. Marsudi, in her remarks explained the event of “The Pride of the Indonesian Heritage” was held to introduce “New Indonesia” and its potentials as well as to mark “A New Era” of bilateral relations between Indonesia and the Netherlands, following the launching of A Comprehensive Partnership by the Indonesian President and Dutch Prime Minister in Jakarta, November 2013. 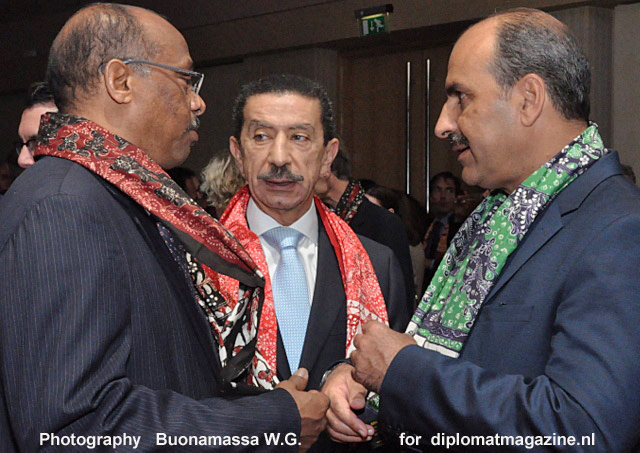 The Ambassador further stated the year of 2013 a “special year for Indonesia – Netherlands relations”. In November 2013, the Dutch Prime Minister, H.E. Mark Rutte, accompanied by more than 100 Dutch CEO’s and private sectors visited Indonesia. During his visit, several agreements and MOUs (Memorandum of Understanding) had been signed, including the Joint Declaration on a Comprehensive Partnership Agreement, MOU on Fisheries and Aquaculture Cooperation, MOU on Triangular Cooperation in the framework of development cooperation, and other agreements. This new era was also marked by the signing of MOU on Defense Related Cooperation which also stipulates cooperation to hold strategic dialogues.
Meanwhile, Minister Ploumen in her remarks appreciated Indonesia’s cooperation and assistance in the aftermath of the MH-17 incidents, especially on the MH-17 victims’ identification by the Indonesian team of Disaster Victim Investigation (DVI).
Indonesian society and Dutch societies also have close and strong-emotional relations, as Indonesian cultures are quite familiar for the Dutch. Those societies’ relations supported the strengthening bilateral relations between the two countries. Minister Ploumen also praised positive developments in Indonesia as Indonesia is now “an economic powerhouse” and an important Dutch partner. On the other part of her remarks, Minister Ploumen also delivered Dutch congratulation for the successful Indonesian President and Vice President’s election. She further expressed Dutch government readiness to cooperate with the new Indonesian administration to pave stronger cooperation in the near future.
At the reception, two Indonesian leading designers of Denny Wirawan dan Tuty Cholid featuring Indonesian modern design of batik and  tenun ikat (woven fabric). While culinary promotion of Indonesian cuisines was served by Indonesian chefs living in the Netherlands “Indonesian Satu/ Indonesia One”.
In addition, a number of small and medium enterprises of BNI’s trained partners were also exhibited high quality products including carved woods and metals, leather products, home decorations, fashion fabrics and else. The reception was also enlivened by live music of traditional bamboo’s musical instrument called Arumba followed by an interactive angklung with all audiences and guests.
The Netherlands is one of Indonesia’s major partners in trade and tourism. By doing promotional activities in the Netherlands, it is hoped to increase the current strong bilateral trade figures that reached USD 5 billion in 2013. Profound achievements in the bilateral cooperation between the two countries have been placed.  Those achievements are significant assets for both countries to pave stronger relations in the near future.
For a full photo-album please click here: https://www.flickr.com/photos/121611753@N07/sets/
Share
Facebook
Twitter
Pinterest
WhatsApp
Previous article
2nd Diplomatic Excursion
Next article
Indonesia, the Show
- Advertisement -