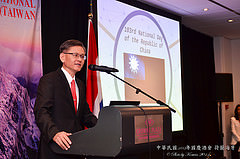 The reception in celebration of the 103rd National Day of the Republic of China (Taiwan),  hosted by the Taipei Representative Office in The Netherlands on October 8 at the Crown Plaza Hotel in The Hague, was attended by a few hundreds guests. Among these guests were Dutch dignitaries, Members of Parliament and former (Prime)-Ministers, residing Ambassadors and Representatives from the trade, cultural and academic sectors in the Netherlands.

Taiwan Representative James Lee presented in his remark an update on Taiwan’s position as a peace maker in Asia and on the bilateral relations of his country with The Netherlands and the EU. Sharing the same values and principles with The Netherlands and the EU in peace, human rights and democracy while referring to the strong advancing connection in trade, investment, scientific research, innovation and sustainability, Representative Lee also urged for support in initiating negotiations for an Economic Cooperation Agreement between Taiwan and the EU.

The Representative gained support in this issue, echoed in a speech by liberal party VVD spokesman for foreign affairs and parliamentarian Han ten Broeke. Another speaker, former Dutch Premier Dries van Agt, lauded the striving democracy and booming economy in Taiwan and its strong ties with The Netherlands.

The reception continued with a lavish dinner buffet and a showcase of Taiwan design products together with a splendid exposition of Franz Porcelain, an integration of Eastern aesthetics and Western Art Nouveau style, and lasted long after the official closing time. At the end, all guests returned home with a Taiwan orchid as a remembrance to a pleasant meeting with friends of Taiwan.