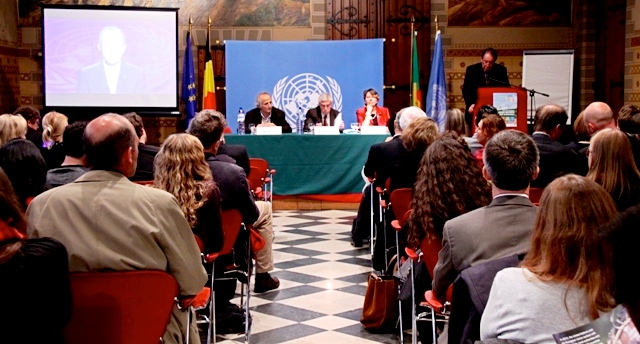 To observe UN Day, the United Nations Regional Information Centre in Brussels organised a round-table at the Militia Hall of the Gothic City Hall of Brussels City on Friday, 24 October 2014. The round-table’s debate focused on Green Cities worldwide. The panel included Ms Barbara Pesce-Monteiro, Director at the UN/UNDP Office in Brussels and Mr Christian Vanden Blicke, Head of the Belgian Directorate for Sustainable Development and Climate Change and Professor Bernard Declève from the Faculty of Architecture at the Université Catholique de Louvain, and expert in urban development.

The United Nations Day (UN Day) dates back to 24 October 1948 when the UN General Assembly voted to celebrate it as the anniversary of its founding charter that “shall be devoted to making known to the peoples of the world the aims and achievements of the United Nations and to gaining their support for its work”. The UN Charter came into force on 24 October 1945.  Since 1971 the UN General Assembly recommends its member states to proclaim the day a public holiday, which is however, not observed as such by the bulk of its members.