Official Visit of the ICC to Bulgaria 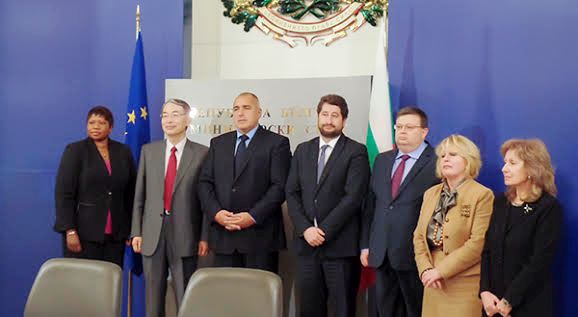 On 20 and 21 November 2014, the President of the International Criminal Court (ICC), Judge Sang-Hyun Song, ICC Prosecutor, Mrs Fatou Bensouda, and ICC Judge Ekaterina Trendafilova took part in an official visit to Bulgaria at the invitation of the Prosecutor General of the Republic of Bulgaria, Mr Sotir Tsatsarov.

During their visit, the ICC officials met with several high-level Bulgarian representatives, including the President of the Republic of Bulgaria, Mr Rosen Plevneliev, Prime Minister Boyko Borissov, Justice Minister Hristo Ivanov, as well as the Prosecutor General of the Republic of Bulgaria and representatives of the Supreme Judicial Council. The Bulgarian officials reiterated Bulgaria’s full commitment to the ICC and the broader system of international criminal justice.

President Song and Prosecutor Bensouda expressed their appreciation for Bulgaria’s longstanding support of the ICC as one of the founding members of the Court. Bulgaria was also encouraged to continue to promote universality of the Rome Statute in the Black Sea region. ICC officials welcomed Bulgaria’s anticipated participation and active role in the discussions at the upcoming 13th session of the Assembly of States Parties of the ICC, which will take place in New York from 8 to 17 December 2014.