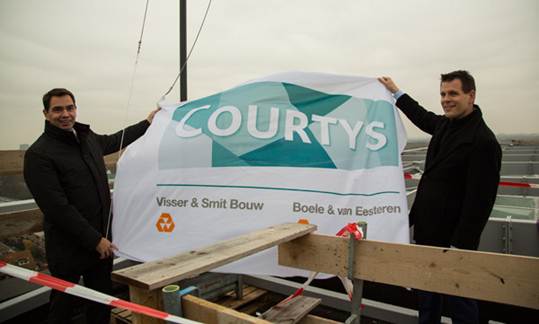 The International Criminal Court (ICC) Permanent Premises Project recently celebrated the important milestone of the highest point of the construction of the new building.

This achievement was celebrated during a ceremony at the construction site, attended by representatives of all the parties involved in the construction activities of the new ICC premises, including the ICC Project Team, Courtys’ construction and design teams, and all of the project subcontractors.

This ceremony, which marked the completion of the steel frame that is built around the Court Tower – the highest point of the structure, was marked by raising the construction team’s flag at that highest point. It was held in recognition of the enormous effort the construction team has put into ensuring the new premises remains on track, to be completed on schedule and within budget in the 3rd quarter of 2015.

In his speech, ICC Permanent Premises Director Neil Bradley stated that “this hugely important building will soon become the home of the ICC and for the next generation will be instantly recognised throughout the world as an important symbol of the quest for peace and justice”.

After just one and a half years of construction work, beginning in April 2013, the new ICC premises is now a major step closer to completion, with the façade complete and the remaining projects – landscaping and finishing the interior spaces – well under way.

Over 300 people who are currently working on the realisation of the ICC Permanent Premises attended the celebration, including engineers, architects, project managers and many of the specialist construction workers all of whom work collaboratively and simultaneously on different parts of the complex construction project.