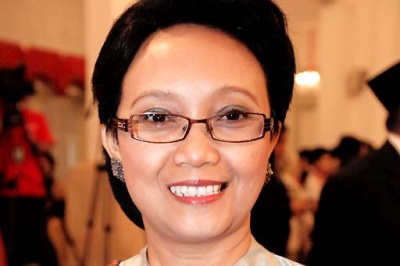 Indonesian ambassador to The Netherlands, becomes Minister of Foreign Affairs

Retno L.P Marsudi has been appointed the first female minister of Foreign Affairs in Indonesia’s history. President Widodo, popularly known as Jokowi, said Retno “works hard and is firm and visionary”. She was one of eight women in the new cabinet which was inaugurated in Jakarta on monday the 27th of october.  Indonesia is world’s most populous Muslim-majority nation.

The new foreign minister said “pro-people” diplomacy would be the soul of Indonesia’s foreign policy, a shift in focus from former president Susilo Bambang Yudhoyono’s principle of a “thousand friends, zero enemies” — which was translated into the country’s increasing presence and roles in international forums.

Retno´s career as a diplomat started after she graduated from Gadjah Mada University’s international relations program in 1985 and joined the ministry’s diplomatic service. Later she became the ambassador to Norway and Iceland, in 2005-08. She then returned to Indonesia to continue her career in the ministry as Director General for America and Europe. In janauary 2012 she became ambassador to The Netherlands.