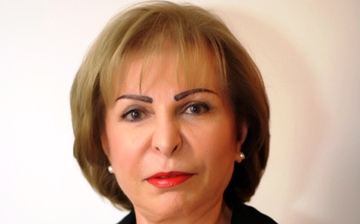 Editor
DIPLOMAT MAGAZINE “For diplomats, by diplomats” Reaching out the world from the European Union First diplomatic publication based in The Netherlands Founded by members of the diplomatic corps on June 19th, 2013. Diplomat Magazine is inspiring diplomats, civil servants and academics to contribute to a free flow of ideas through an extremely rich diplomatic life, full of exclusive events and cultural exchanges, as well as by exposing profound ideas and political debates in our printed and online editions.
By Baron Henri Estramant

After a hiatus of a couple of years, The Netherlands has welcomed a new Bahraini ambassador. Her Excellency Ambassador Alice Thomas Yusuf Samaan has presented her credentials to His Majesty King Willem-Alexander at Noordeinde Palace on 10 December 2014.

Ambassador Alice Samaan is non-resident, that is, her embassy is based in London. In the same fashion, the Dutch mission responsible for relations with the Kingdom of Bahrain is the Netherlands embassy in the State of Kuwait, although there is a resident Honorary Consul in Manama, Bahrain’s capital. The country’s heir apparent, HRH Crown Prince Salman bin Hamad Al Khalifa, attended the investiture of King Willem-Alexander and Queen Máxima on 30 April 2013.

The lady has been ambassador to St. James’s Court (UK) since 2011 after the departure of Major-General Ambassador Sheikh Khalifa bin Ali bin Rashid bin Salman Al Khalifa. The latter’s predecessor as ambassador to St. James’s Court and to The Netherlands, was the kingdom’s incumbent Minister of Foreign Affairs, HE Sheikh Khalid bin Ahmed bin Mohammed Al Khalifa, in ministerial office since 2005.
Diplomatic relations between the then State of Bahrain and The Kingdom of the Netherlands were established in 1972 after the end of the British protectorate on 15 August 1971. 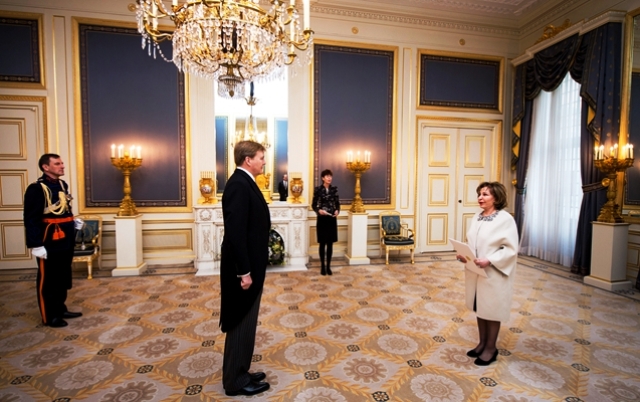 Ambassador Samaan is a remarkable woman with an outstanding career. The Diplomatic Corps accredited to The Netherlands is glad to welcome in their ranks, the very first chairwoman of a Middle Eastern parliament. In April 2005, she chaired the country’s appointed Consultative Council (Upper House). She is the daughter of Christian, Syrian immigrants to Bahrain; a country well-known for its friendly policies towards foreigners.

Whilst in The Netherlands Ambassador Samaan met with the Dean of the Diplomatic Corps, Ambassador Carlos Arguello Gómez (Nicaragua), the Arab ambassadors based in The Hague, officers from the Dutch Ministry of Foreign Affairs and business people.

The island kingdom of Bahrain celebrates its National Day on 16 December marking the investiture of the land’s 13th Hakim (Ruler) and first “Amir of Bahrain”, Sheikh Isa bin Salman Al Khalifa (reigned 1961-99). The latter’s son, His Majesty King Hamad II is the country’s current monarch, whereas the government is led by HRH Prince Khalifa bin Salman Al Khalifa since 1970, making him the longest serving chief of government in the world. The Prime Minister is the King’s uncle, brother of the late Amir Isa bin Salman.

The role as first lady is fulfilled by King Hamad II’s first wife, HRH Princess Sabika bint Ibrahim Al Khalifa, albeit His Majesty has three other spouses. Moreover she is the mother of Crown Prince Salman.