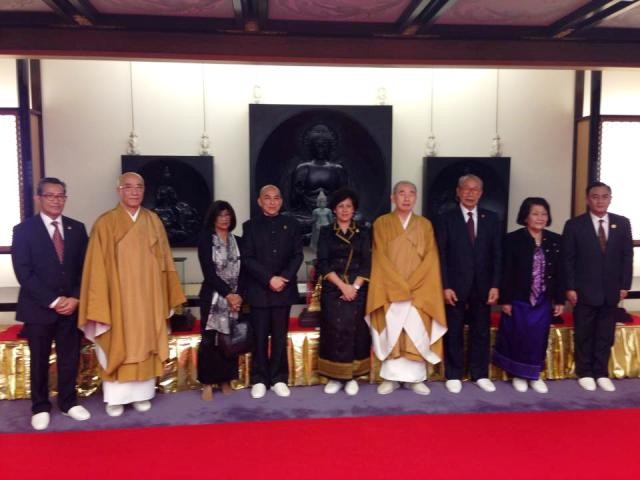 Japan is the host country for the VI World Buddhist Summit taking place from 8 to 14 December 2014.
The summit in Tokyo is the supreme Buddhist conference representing over 370 million Buddhists in the world. It is organised with the cooperation from the United Nations as well as supreme Buddhist leaders around the globe. The first Buddhist Summit was held in 1998. Now their members include supreme Buddhist leaders of 33 countries in all five continents.
The summit seeks to organise Buddhist leaders worldwide. The base of their belief being the teachings of The Buddha, that is, Dharma. They may be bom in different countries, speak different languages, live in different cultures and environments, and follow different traditions of Buddhism. However, when returning to the original teachings of The Buddha, they are all his disciples as well as Dharma friends equally seeking for nirvana, which is the ultimate purpose of Buddhism.
The summit’s ultimate goal is the promotion of the Royal Grand Hall of Buddhism as as a meeting place for Buddhist leaders to overcome any differences in nationalities or Buddhist interpretations (traditions) as well as a spiritual base for Buddhists to unite as one and work together in order to spread Buddhism to the rest of the world
Guest of honour for the summit’s opening ceremony was His Majesty The King of Cambodia accompanied by his half-sisters, HRH Princess Norodom Buppha Devi, President of the Royal Cambodian Ballet, HRH Ambassador Norodom Arunrasmy, Royal Cambodian Ambassador to the Federation of Malaysia, and his cousin HH Prince Sisowath Tesso.
Share
Facebook
Twitter
Pinterest
WhatsApp
Previous article
New Bahraini ambassador
Next article
ICC Pre-Trial Chamber I issues non-compliance finding for Libyan Government
- Advertisement -